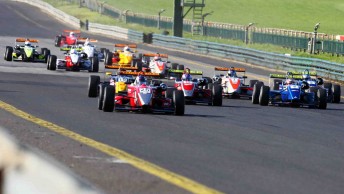 The start of yesterday's Formula 3 race at Sandown

The 2010 Shannons Nationals Motor Racing Championship will conclude at Sandown Raceway today after a day of high drama for several title contenders in the seven categories that took to the Melbourne track yesterday.

The Formula 3 Australian Drivers Championship will go down to the wire in the last two races of the season, with Mitch Evans eating into team-mate Ben Barker’s title lead.

“I got it off the line well, and I just kept an eye on my mirrors throughout,” Macrow said.

“I managed to keep the gap, if I had three or four car lengths advantage on the straights, I could hold off Mitch in the newer car under braking.

“We’ll go away tonight and tune the set-up.”

Barker currently holds a five point advantage over Evans, with Tweedie now 13 points off the lead.

Kingsley lost control through the esses at the end of the back straight, all-but destroying his 996 model car as it ripped along the outside wall, in the process giving rival Roger Lago the upper hand in the title chase.

The Queenslander emerged unhurt from the incident, but subsequent repairs to the armco wall delayed proceedings significantly.

“I was in fourth place, two-tenths of a second off the pace,” Kingsley said.

“I crashed in the spot where I was trying to make up the time.

“The car got out of shape on the first sweeper at the top of the hill, and I fought it all of the way down.

“I’m very disappointed, but it’s my own fault.”

A push for Kingsley to take over his team-mate Terry Knight’s car for the first race came to naught when the rule book vetoed the move, even with the support of all of the competitors in the field.

“It’s great that everyone in the category got behind me to change cars, but it just wasn’t possible under the rules,” Kingsley said.

“Roger was the first one to sign it; you don’t see something things like that very often in motorsport.”

For Lago, beating Kingsley on the track for the title would have been important.

“Obviously Terry gave up his car, and Matt would have had to start rear of grid,” Lago said.

“That was all ok, but I was told on the dummy grid that Matt couldn’t start.

“It’s a shame, but with two races to go anything can still happen.

“I was trying my best out there; I got a few off the start which was good.”

Local driver Kane Rose was a surprise winner in the opening heat, with Lago’s fourth placing just short of gaining enough points to wrap up the title.

Holt’s BMW 335i made substantial contact with Colin Osborne’s Mazda 3 MPS at the opening corner, with the pair eliminated on the spot from the shortened 45 minute long race.

The Shannons V8 Touring Car Series Time Attack was without doubt the most competitive session of the season, with an incredible 0.0245s splitting the top three, with Chris Smerdon leading home Tony Evangelou and Terry Wyhoon.

The opening session proved to be a classic, with the pair trading fastest times on a damp track until Hossack took the top spot on the very last lap, with the final margin being a slender 0.0565sec.

Title challenger Tony Bates will line up from position number three for the first race.

The Australian Saloon Car Series qualifying sessions have set up an enthralling finale tomorrow, with the top three in the championship lining up in the top three spots.