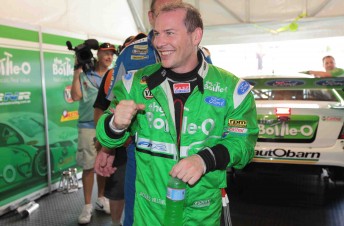 Ford is making a big push to get Jacques Villeneuve to compete in the V8 Supercars Championship Series next year.

The Sunday Telegraph has revealed that the former Formula One world champion has Ford’s motorsport manager Chris Styring in his corner, and is trying to piece together a multi-million dollar deal to lure him to the popular Australian series.

The report says that Villeneuve and Ford would consider buying a V8 Racing Entitlements Contract to secure a future for him in the sport.

In his V8 debut at the Armor All Gold Coast 600 yesterday, Villeneuve created headlines after being involved in a number of first lap incidents.

Styring is not concerned with Villeneuve’s erratic debut and wants him in a Ford Falcon next year.

“I have begun talking with him about coming out here full-time,” Styring told the Sunday Telegraph.

“It is something he is thinking about, for sure.

“We had dinner last night and he said he would do it if we could convince his girlfriend. It is just a matter of getting him a proper offer. We need to get him in a Ford, get him the right salary, and get him the right technical package.”