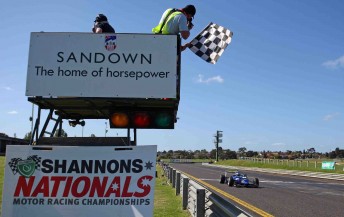 Ben Barker crosses the line to win the F3 title

Ben Barker has won the Formula 3 Australian Drivers Championship for the CAMS Gold Star in one of the closest scenarios imaginable.

In an incredible 15-lap finale at Melbourne’s Sandown Raceway today, the championship was decided when 19-year-old British driver Barker scored the fastest lap of the race, giving him a bonus point that edged him clear of Kiwi rival Mitch Evans.

To make matters even more dramatic, Evans’ set his fastest lap on the final lap of the race – leaving the title in limbo until both had crossed the line.

Barker’s title is the third in three years for the dominating Adelaide outfit, Team BRM, and the third-consecutive title for British-born drivers.

Such was the tension that Barker wasn’t informed of his win until well into the cool-down lap following the race – won by Tim Macrow.

“The team came on the radio and said ‘Ben Barker…’ and then nothing! It was like being on a game show!” he grinned.

“I was screaming at them to tell me, and then (engineer) Craig Rundle came over and said ‘Ben Barker, you are the champion.’

“I couldn’t believe it – It was a huge relief. I didn’t know I had won and didn’t know who had fastest lap so it was an amazing feeling to know that I had done it.

“It was a day of completely mixed emotions because at one stage I thought it was all over.”

The win came after a major incident in Race 2. The race was red flagged and no points were awarded.

John Boothman and Graeme Holmes collided at the kink following. Holmes was sent skywards as he straddled the kerb on the right hand side of the circuit.   His car was propelled into the air in a similar fashion to Mark Webber’s now infamous crash in Formula One earlier this year.

Holmes’ landed heavily with the car upside down and destroyed, though both drivers were unhurt.

Worse, perhaps, for Barker, who tangled with Chinese driver Zhang Shan Qi.  Had the car gone on, Barker would have probably lost the title then.

“After the Race 2 crash I thought it was all over but in a way someone else’s unfortunate accident worked to us, because Race 2 was cancelled and that worked so well for us,” Barker said.

“Bad for them, good for us so there was a bit of luck.

“I started from fourth in the finale’ and the boys had done such a great job to get the car done – and it was awesome. I put my head down and in the end it was a very tough race.

“Mitch put on some really good defending moves on and then Tweedie used his straight line speed to drive past and that made things more interesting.”

Macrow won the race while a mighty war waged for second through fourth between the three title contenders. Evans was under fire from Barker early, before Tom Tweedie squeezed his way through to the podium – relegating Barker to fourth – to make the title calculations even more difficult.

In the other categories during the final round of the Shannons Nationals, Stuart Kostera took a clean sweep of the race wins in the Australian Manufacturers Championship en route to taking out the title in his Mitsubishi Lancer EVO X.

The points equation swung in the West Australian’s favour after former series leader Garry Holt (BMW 335i) made contact with Colin Osborne (Mazda 3 MPS) at the first corner of the first race, with his DNF and fourth place finishes for the weekend not enough to hold on to the prize.

Kostera’s teammate Inky Tulloch was second in both races, ahead of Jake Camilleri aboard his Mazda 3 MPS.

“It’s great, I’m very happy with the result this weekend and the year,” Stuart Kostera said.

“We’ve always had a quick car, but everything really clicked at Eastern Creek in the Six Hour.

“We’ve had a really good year, Inky has pushed us all the way, and it was very pleasing to lower the lap record again today.”

Darren Hossack and James Sera finished one-two in all three races for the Kerrick Sports Sedan Series, with Sera scoring enough points to secure the title despite missing the opening round.

“The car ran like clockwork all year long, that’s what won us the title,” James Sera said.

“It’s unbelievable; I never thought we were going to win the title especially after missing the opening round.

“The team has put in countless hours, their effort has been phenomenal.

“The end result is worth it.”

Third for the weekend was outgoing champion Des Wall, with Phil Crompton fourth.

Local Victorian driver Kane Rose took three wins from as many starts, but the racing was interrupted by several incidents.

The Sunday morning race saw Jeff Bobik and Steve Kepper crash off the start, while the afternoon race was curtailed after Ivan Klasan hit the wall hard while battling with Lago up the back straight. Klasan was unhurt.

Simon Tabinor may have won the battle of the Saloon Car National Series, but Tim Rowse won the war, with the Victorian taking out his maiden national title.

Tabinor won races two and three, with the victory in the finale a true sprint to the chequered flag, with the final margin of victory being 0.09sec.

To highlight his championship win, Rowse took out a new Sandown lap record in the third race.

Andrew Nowland finished third on the round podium behind Rowse.

The Commodore Cup National Series put on its standard display of breathtaking three-wide racing, with the close racing keeping the large crowd on the edge of their seats.

Adam Beechey may have finished second in the round, but he scored enough points to take out his first national crown.

Marcus Zukanovic won the first and third races on his way to the overall round victory, while Ross McGregor won his first ever race, the reverse grid heat two, giving him third for the round.

A highlight of the final race was the lap record being traded between Geoff Emery and Zukanovic, with Emery taking his place in the record books on the very last lap.

Wyhoon won one race to Evangelou’s two, with Matt Hansen scoring a sensational overall podium to cap off his rookies season in the category.

Smerdon, Evangelou and Wyhoon were split by an incredible 0.02sec in the most competitive single-lap Time Attack session of the season.