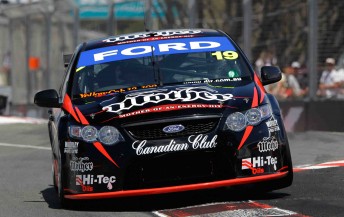 Sebastien Bourdais admitted he was surprised at the adulation he received upon stepping from the Mother Energy Drinks Falcon after his opening stint in yesterday’s Race 19 of the V8 Supercar Championship.

The Frenchman handed the car over to regular driver Jonathon Webb on Lap 42 in the lead of the race after showing impressive pace, staying out of trouble, and being the last of the leading contenders to pit.

“I was surprised, I didn’t think I’d done a good job or anything special, then I got out of the car and everyone was like ‘hey, great job,'” he said.

“I just kind of drove around, kept my nose clean, and didn’t make too many mistakes.”

Having won on the streets of Surfers Paradise twice in a Champ Car, Bourdais found the V8 Supercar race a whole new experience.

“At the time I had no idea if I was doing alright, bad, or good, you know,” he said.

“It’s very different (to practice) – you’re never quite sure whether you’re doing too much or not enough, because with the tyre wear I think maybe I’m pushing too hard.

“But it turned out to be alright, and I tried just to remember what they said – ‘if you feeling that you’re abusing the tyre, just back it off a bit’.”

Bourdais said he found the adjustable anti-rollbars in the car to be of little assistance.

“I did play with them a little bit, trying to get the balance, and it did help.

“But you know, at some stage, both the front and rear just kind of give up, and then you’re just trying to keep it on the island – the bars don’t do much.

“But it was very difficult to push also in the beginning because the track conditions were still very dusty and there was fluid all over the race track in the hairpin and the fast chicanes, there was a lot of junk.”

“It is not easy because you can’t see the apexes, and pretty quickly you realise when you brake right behind another car that, even though the cars don’t have much downforce, it makes a difference,” he said.

“The rear is moving around, and it’s quite hard to stop the car.”

Earlier, Bourdais had avoided the opening lap chaos, thanks to a combination of careful driving and old fashioned luck.

“To be honest I stalled the car at the start, and was very safe intitially because I could see everybody going around the chicane,” he said.

“We ended up at the hairpin. I think I finished on Tiago’s bumper, and I think Helio finished on my bumper. I ended up on the right side, and straight away I could see that I was gaining a lot of positons.”