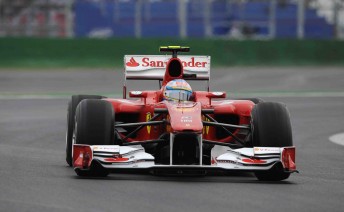 The Formula 1 World Championship has been turned on its head by a dramatic Korean Grand Prix, with Ferrari’s Fernando Alonso taking the race win and championship lead.

After the first 17 laps were held under Safety Car due to extreme wet weather, it took just two laps for the drama to begin.

Erstwhile championship leader Mark Webber lost control of his Red Bull while running in second place behind team-mate Sebastian Vettel. Webber’s car was then collected by Nico Rosberg’s Mercedes, putting both drivers out on the spot.

Vettel then looked set to take the race win and championship lead, before his Renault engine failed with just nine laps to go.

Lewis Hamilton ended the race second, having past Alonso during the pitstops, before losing out to the Spaniard on Lap 35 when he made a mistake at Turn 1.

Title contender Jenson Button had a frustrating daym which included a spin on his way to 12th place and no points for the McLaren driver.