Tander and McConville on the Gold Coast podium

Garth Tander says he does not feel bad for James Courtney after the championship leader was given a black flag while leading in the closing stages of today’s Gold Coast race.

Courtney received the penalty with 10 laps to go for failing to maintain a constant speed during a prior Safety Car restart. CLICK HERE for Courtney’s take on the penalty.

The penalty appeared particularly harsh after Tander’s team had a black flag for spilling fluid withdrawn earlier in the race.

When asked if he had sympathy for Courtney, Tander replied with a flat “no – I’m sure he didn’t feel for me in Abu Dhabi when I got my penalty” – referring to a qualifying infringement by the HRT in March.

Tander also said that he was not surprised by Courtney’s penalty, despite initially thinking he was being punished for a separate issue. 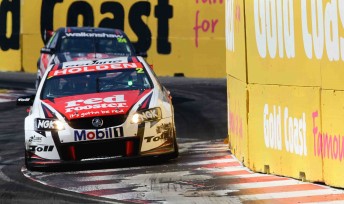 “He actually went for the last corner very, very early, before we got the call on the radio that the Safety Car was in pitlane, so I actually thought he got it from going early.”

Tander drove masterfully after taking over from co-driver Cameron McConville on Lap 39, and later admitted it was a long, tough race.

“We had a few dramas during the race – the front spoiler fell off, the headlight fell out and smacked Lowndesy, the brakes were going away, and we had a gearbox issue as well,” he said.

“(102 laps) is a long way, and when Al (engineer Alistair McVean) got on the radio and said there’s 50 to go, that was pretty depressing.

“But then we all got into a rhythm and punched in a fair chunk of the laps before that last Safety Car.

“It’s a long way around here – it’s a bit like running around your clothes line the short track here.”

Tander said he was unaware of why the black flag was issued to his car during the race.

“I don’t know much about that,” he said.

“They didn’t tell me that there was going to be a black flag apparently going to come our way for the drink bottle overflow. All Al said to me was to just drink a heap, so I started drinking a lot.

“I didn’t know what he meant, but we got enough down in the drink straw and out of the vent that the issue went away.

“There were a lot of other cars out there doing the same thing, so I’m not sure if they were in the same boat as us.”

“Cam’s first stint was what won us the race. He got a 10 second penalty for allegedly rolling at the start – but that stint was amazing,” he said.

“He was up against Steve Owen, who everyone seems to rate, and he pulled away from him very, very easily.”