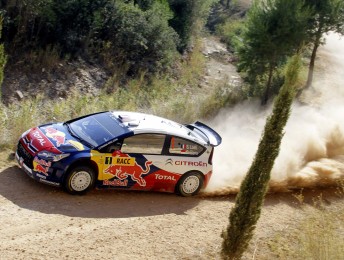 Sebastien Loeb out in front in Spain

For the first time in many years crews faced an opening day on mainly gravel stages, but the second day will be exclusively on tarmac. Mechanics had a longer than usual end of day service to carry out the necessary suspension and set-up changes for the different surface.

Loeb is in front with a lead of 3.8 seconds over the Citroen Junior Team’s Sebastien Ogier, but the seven-time World Champion said he was surprised to be leading.

“I really didn’t expect it to work out like this,” said Loeb.

“In any case I’m in the lead, but it’s not much of a lead. We’ll see how it all works out tomorrow. Everything is equal really and now we start again from scratch.”

Loeb will be the first on the road in Leg 2 and that is expected to be an advantage over his rivals as he will have the cleanest road conditions.

“Under any circumstances, catching Seb is going to be pretty difficult so I’m not worrying too much about road position,” said Ogier.

“The only thing I can do is limit the gap and try to take advantage of any opportunities that come my way. I know the stages tomorrow, so that could perhaps help me – but the same is true for Seb.”

Ford’s Jari-Matti Latvala was regretting an incident on the final stage when he broke a wheel.

“I didn’t notice the small rock that broke the rim,” said Latvala.

“Afterwards I was convinced that the tyre would go down but in the end it stayed up. I’m happy, but I’ve had too many little mistakes like that today.”

Another person regretting an earlier misfortune was Petter Solberg. The privateer Citroen driver lost 20 seconds on the opening stage, which if removed would put him less than three seconds off Loeb in second place. As it was, he ended day one in fourth.

“It’s so frustrating,” said the Norwegian.

“As a privateer I’d say it’s impossible to win against the factory teams, so you can’t afford to throw away any opportunities. But we’re in the fight, and tomorrow is another day. Apart from the first stage, I think we’ve driven really well.”

Mikko Hirvonen and Dani Sordo are locked in a battle for fifth after ending the opening day separated by just 12.3 seconds. Hirvonen admitted that he didn’t feel particularly tuned into the rally, having overcooked his brakes in the morning.

“That’s not something I’ve done for years,” said the Ford star.

“There’s something missing, but I can’t quite put my finger on it.”

With the cars now in asphalt trim, competitors face two identical loops of stages west of the town covering 126.62km.  The loops are split by a return to the rally’s PortAventura base for a 30-minute service break.