Courtney: No win, no reward for embattled team

Courtney: No win, no reward for embattled team 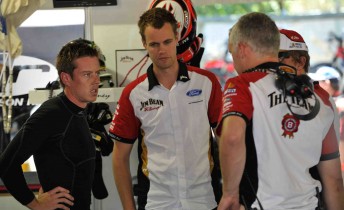 Victory would have been a great reward for Dick Johnson Racing after a hard three weeks, says Jim Beam Racing’s James Courtney.

In the end, Courtney and his co-driver Warren Luff could only muster 10th after being penalised for ‘failing to maintain the prescribed speed after the Safety Car lights were extinguished at the end of the last Safety Car deployment.’

Courtney snatched the lead from eventual winner Garth Tander on lap 80 before he was forced to serve a drive-through penalty at the start of the final Safety Car period.

It has a been a trying few weeks for the title leading team after it was confirmed that Dick Johnson and co-owner Charlie Schwerkolt were brokering a deal for wealthy mining magnet Nathan Tinkler to purchase Schwerkolt’s half of the squad.

That deal is yet to be finalised, with all sale deadlines having now passed.

Speedcafe.com.au understands that Tinkler may not purchase the team.

There have been a number of deadlines mentioned since the initial story broke on October 1st, but Schwerkolt told Speedcafe.com.au that a deal “has” to be sorted by the end of next week.

Courtney said that it would have been a great reward to take victory on the streets of Surfers Paradise, in light of the team’s inner turmoil.

“The disappointing thing is that all the crap that has gone in within our team. I keep telling my boys that we need to keep our head down and concentrate on the car,” he told Speedcafe.com.au.

“To have this happen, it throws it all in your face.

“We’ll press on tomorrow. We have a straight car. It’s fast. We’re in good shape for a result.”