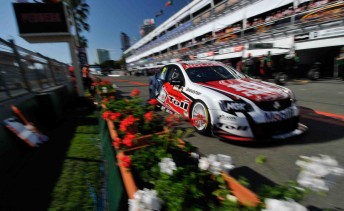 If V8 Supercars Australia and the Queensland Government wanted the world’s eyes on the Gold Coast, they got it, as carnage, controversies and championship casualties were the order of the day on the streets of Surfers Paradise.

Courtney had taken the lead with a smart move on lap 80, passing a wounded Tander, but Courntey was adjudged to have allowed the Safety Car to drive too far in front , costing him a chance to extend his title lead.

While Courtney fell to 10th, Tander took the win, although his race was also affected by stewards and controversy.

Liquid was being pumped out of the side of the #2 Toll HRT car, with the stewards issuing a black flag penalty for a fuel leak. However, the factory Holden team fought the claims, saying that it was water from the drink bottle that was leaking.

The stewards withdrew the black flag, allowing Tander to eventually march to the win and keep his title hopes alive.

Tander’s team-mate McConville almost cost them a chance at the win after he jumped the start and was handed a 10 second addition to his first pit stop. The experienced McConville knuckled down and opened up a huge lead in one of the best stints of his career.

The race started in chaos, with all bar four teams starting their Primary drivers. From third place on the grid, former Formula One world champ Jacques Villeneuve found himself in the wars, crashed into three times in the first four corners – including two hits from his team-mates!

Orrcon Steel FPR’s Mark Winterbottom had his championship title hopes derailed when Youlden collected Villeneuve at the start, launching his Falcon into the air. The entry eventually finished 21st.

Fujitsu Racing’s Lee Holdsworth was looking like a podium chance until he collected the tyre wall at turn two at the half race distance.

Of the stand out internationals, Sebastien Bourdais ended his first stint at the front of the field, putting in a huge 41 lap stint. It put team-mate Jonathon Webb in a great position to take eighth place at the end of the 102 lap event.