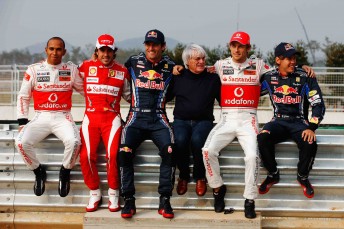 Championship leader Mark Webber has ended the first day of running on the new Korean Grand Prix circuit as the fastest man.

With track conditions improving markedly throughout the day, the second and final practice session was an action packed affair, as the main contenders each took turns to head the field.

Webber’s 1m37.9s effort left him two tenths of a second ahead of Fernando Alonso – who trails the Red Bull driver in the points standings by just 14 points with three races remaining.

Robert Kubica (Renault) and Hamilton’s team-mate Jenson Button rounded out the top five. The day was not without drama for the Englishman, after McLaren mechanics were forced to extinguish a small fire at the back of the car during Practice 2.

Earlier in the day, championship contenders Webber, Alonso, Hamilton, Vettel and Button posed with Bernie Ecclestone for a special photograph, paying homage to a similar pose struck by Alain Prost, Nigel Mansell, Ayrton Senna and Nelson Piquet during the 1986 season.