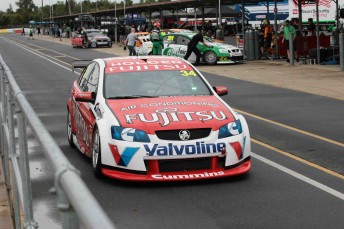 Patrick Long aboard the Fujitsu Commodore at Queensland Raceway

American Patrick Long is confident that he can compete with the top international drivers at this weekend’s Armor All Gold Coast 600, but says he will not take risks that may jeopardise his future in V8 Supercars.

The factory Porsche driver races in the American Le Mans Series, and has yet to race in a V8 Supercar or on the Surfers Paradise street circuit.

While some of his fellow internationals have experience with the cars and the circuit, Long told Speedcafe.com.au that he believes he can hold his own.

“I’m confident that I can run with them, or even a little better than them,” he said, referring to his more experienced rivals.

“I’m a GT guy, I’ve done a bit of NASCAR over the last couple of years, and I feel like this car is somewhere in between a Nationwide car and a GT2 car, in terms of weight and things like that. So I feel that’s an advantage in my favour.

“There are guys obviously who have either driven these cars in the past or know the track, so you expect them to go really well.

“But if I could be solidly around those top internationals – I’m pulling my weight.”

Long hopes that his performance this weekend will enable him to gain an endurance drive in future V8 Supercar seasons.

“The main goal is to be invited back in the future, and not go all for nothing,” he said.

“I think there are a few guys here who will be trying to show what they can do, with the mentality of one weekend, but I want to look at this on a bit more of a long term basis.

“It would be easy to get caught up in the glitz and the glam of the competition amongst the international drivers.

“I’m obviously much lesser known than all of the guys here, but my objective is not to prove some of the naysayers wrong.

“My objective is to do the best job for the team, because ultimately my goal would be to be a guy that could be a future enduro driver here in the V8s. That’s my goal.

“I’ve followed this championship since 1998 when I lived with James (Courtney) back in Italy. Ryan (Briscoe) was my flat-mate in Italy too, so we got some of the weekly magazines over, and I’ve been following the championship since then.

“Honestly I never thought I’d get the chance to have a run until this concept came up.”

Following the advice of US-based Australian Leigh Diffey, Long contacted Fujitsu racing team owner Garry Rogers about driving on the Gold Coast, and is highly pleased with the way things are going.

“Garry’s gone out of his way to support me, where maybe there were a few people that were a little bit cautious of inviting me,” he said.

“Now I just want to return the favour that he has given me, and do a good job.”