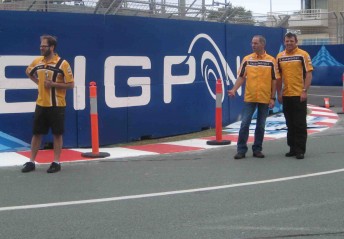 Jason Bright believes that the new layout of the Surfers Paradise street circuit will add further to the spectacle of this weekend’s Armor All Gold Coast 600.

Many teams, including Bright and his engineer Phil Keed, took to the circuit on foot yesterday evening, noting several new surfaces, and the exact makeup of the new BigPond Hairpin, referred to as Turn 4.

“It’s going to be a much better race track for our cars than the old circuit,” Bright told Speedcafe.com.au.

“The trouble here is that it’s always been very hard on brakes.

“The main reason for that is, in the first 35 to 40 seconds of the lap, there were three really big stops, and that was just very hard on our brakes.

“I think the new circuit will be a lot easier on brakes, and I don’t think we’ve lost any passing opportunities out of it.

“It also condenses the lap a lot more, so the fans get to see the cars come past a lot more often. So I think that it’s a pretty good outcome for them.”

The Trading Post Racing driver’s only reservation about the new hairpin is the potential for water to puddle at the apex of the corner if it rains.

“The middle of the corner has quite a dip in it, so it’ll turn into a bit of a bump through the middle there,” he explained.

“The biggest problem is if we get a bit of rain it could turn into quite a big puddle there.

“But other than that I think the radius and so on is alright.

“At the end of the day I think that it’s still a pretty good outcome. It adds a bit of new character to an old track.”

Keed was also concerned about the potential for a first lap accident at the hairpin.

“I think it’s going to be pretty tight on the first lap,” he said.

“I guess it’s always the same into the second chicane anyway – but it’ll be an interesting first lap.

“It’s got a big crown in the middle, a big bump and sort of a dip on the exit, so we’ll wait and see what that does to how the drivers attack it.”

As ever, the Gold Coast circuit contains a range of different surfaces, with a mysterious, smooth, grey coloured surface laid down at turns 1, 2, 3, 12 and 13 of particular interest to engineers.

“Generally they’ve only resurfaced in the corners, and they’re the only bit that matters anyway,” said Keed of the surface changes.

“There are some bumps in the corners where the surface changes. The last corner is still the old surface – that’s the only one.

“We think the new surface looks quite grippy, but it looks like a funny concrete sort of surface, which I’ve never seen before.

“It almost looks like the stuff they patch the track with when it brakes up. It’s very smooth, which should suit our cars, but we’ll see.”

The V8 Supercars hit the new track for the first time this morning for opening practice.