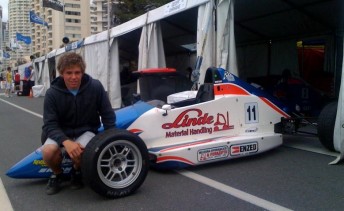 The Genuine Ford Parts Australian Formula Ford Championship will hit the streets of Surfers Paradise this weekend for Round 6 of the series.

Of the 21 drivers competing this weekend, 13 hail from the Sunshine state, but young Victorian Cameron Waters is keen to upset the party.

Waters, who currently leads the Rookie of the Year standings, joins champion outfit Sonic Motor Racing Services for the remainder of the season and will be hoping that a new team and livery could be a good omen.

“I’ve been working with Sonic a little bit already this season, so I don’t think it will take too long for me to get used to working with them full time,” Waters told Speedcafe.com.au.

“In a lot of ways it’s going to be easier this weekend, because I can just focus on my driving and maintaining our lead in the Rookie of the Year.

“I really want to make sure we finish all of the races this weekend within the points and if we can do that, then a podium isn’t out of the question.”

Chaz Mostert currently leads the championship by 39 points over Ash Walsh, following his third round win in Townsville. After a stint in the Fujitsu V8 Supercar Series at Bathurst, is keen to re-focus on his Formula Ford commitments.

“I can’t wait for this weekend, it’s going to be great to get back in the Formula Ford after such a long break,” Mostert said.

“I’ve just finished racing a V8 Supercar at Bathurst and I think if anything, it’s made me even hungrier for victory next weekend – I’ll certainly be pushing.”

Championship rival Nick Foster is also looking forward to a strong weekend at his home event after a tough outing in Townsville. The event saw him drop to third in the championship for the first time since the start of the season.

“There’s no doubt that Townsville was a terrible round for me and it definitely hurt my championship chances, but I’m looking forward to racing in front of a home crowd,” Foster said.

“We had a test day last week and the Steeline Mygale is incredibly quick, so I’ll be on the attack from the get-go to see if we can take home the victory.

“It’s going to be an incredibly tough weekend with a new circuit to learn and some really good drivers out there, but I’m hoping to be the first Queenslander across the line on Sunday.”

The Formula Ford Championship will take to the track for practice and qualifying tomorrow ahead of three races across the weekend.