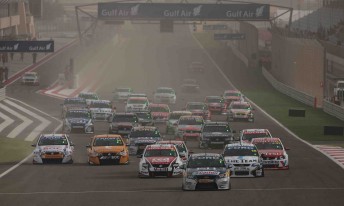 The V8 Supercars at Bahrain in February this year

The announcement of the 2011 V8 Supercars calendar is likely to be delayed, and a V8 Supercars board meeting today could go some way to deciding its future.

Next year’s V8 calendar, originally scheduled to be announced at Bathurst, was scheduled to be confirmed at this weekend’s Armor All Gold Coast 600, but is likely to be delayed again.

Speedcafe.com.au understands that there is an issue with the second round of the series at the Bahrain International Circuit. V8 Supercars CEO (and former Bahrain circuit boss) Martin Whitaker has made an urgent trip to Bahrain to discuss the future of the class at the Middle Eastern track.

V8 Supercars Executive Chairman Tony Cochrane told The Courier Mail today that there is no use rushing the announcement.

“The matter is in the hands of others, but we just want to get it right the first time,” Cochrane said.

Furthermore, V8 Supercars will hold its teams forum and Annual General Meeting this Monday, after the racing action on the Gold Coast.

Amongst discussion points will be the make-up of the board itself. Stone and Edwards will remain as members for a further year, while Dane and Morris have come to the end of their terms and will both stand for re-election.

Of the two alternate board members, Brad Jones will remain for a second year, while Dick Johnson Racing’s Charlie Schwerkolt will stand down.