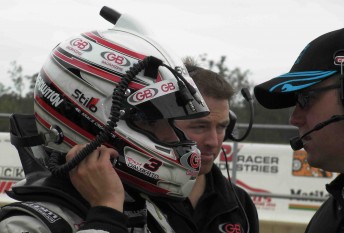 The deal was struck to ensure that the pair has the same functions in their helmets, make their racing, pit stops and pit-to-car communications easier.

Monteiro will partner with D’Alberto in the #3 Centaur Racing Commodore VE this weekend at the Armor All Gold Coast 600 at the Surfers Paradise street track.

“Tiago runs a Stilo helmet and it just made sense for us to run the same helmet,” he said.

“I used it for the first time yesterday, and honestly, it is the best helmet I’ve ever worn.

“It has a great air vent, better ventilation and drink straw access. It’s going to make life a lot easier.

“A lot of the teams do it, making sure they have the same helmets, and now I know why.

“I’ve always run Arai, and there was nothing wrong with them, but this one is so good. You don’t wear ear pieces, they have ear muffs inside. It’s very comfortable.”

D’Alberto is looking forward to this weekend’s Gold Coast race, and while he has enjoyed success on street tracks this season, he is wary of the international driving influence that will play its part.

“I love street tracks and we’ve been competitive on them this year, but it’s going to be difficult here at the Gold Coast,” he said.

“Half of the field has regular co-drivers, and when these cars are on full tanks, worn out tyres and the like, those guys will shine.

“The internationals haven’t got that experience and it will be difficult for them to deal with it.

“Driver changes are going to be crucial and we did a lot of practice yesterday at QR, but in the heat of a pit stop, you don’t know how it’s going to go.

“I can’t see Tiago being a drama. We’re getting along really well. He’s been close to the pace every time he has been in the car, so I’m confident he’ll do well.”

D’Alberto, Monteiro and the rest of the V8 Supercars stars will be on track for the first practice session on the Surfers Paradise track at 10.15am tomorrow.