Franchitti wary of staying out of title fight

Franchitti wary of staying out of title fight 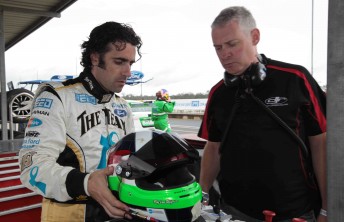 Dario Franchitti says that he and his fellow international stars at this weekend’s Armor All Gold Coast 600 will do their best to stay out of the V8 Supercar Championship battle.

While the main championship contenders – James Courtney and Jamie Whincup – are not paired with internationals, there remains the possibility that the on-track actions of the guest drivers could affect the points standings.

Franchitti was originally under the impression that he’d drive with his long-time friend Courtney, but due to Courtney’s championship situation, will drive with Steven Johnson in Jim Beam Racing’s second car.

“The last thing I want to do is, as an outsider, come in an affect the championship in anyway,” Franchitti told Speedcafe.com.au.

“Certainly the guys that I know and am friendly with, who are coming here, we’re all respectful of what’s going on, and very aware. None of us want to play a part in the championship.

“I’d love to have driven with James – that was kind of the point to doing the whole thing.

“But then when it became clear that James was in the running for the championship, it’s not the right thing, you know.”

“It’s really interesting just to learn the car, what it likes, and learn the limit,” he said.

“You brake and think you’ve braked too early, but then you try to brake two car lengths later and you go off with the wheels locked.

“It’s not so much the weight (that effects the braking), it’s the lack of downforce I think. It’s very difficult to feel what’s going on, when the wheels start to actually lock, things like that.”

While Franchitti has no previous V8 Supercar experience, he believes running a NASCAR Nationwide Series race on the Watkins Glen road course in 2008 has helped.

“It seems kind of similar power level – overall I’d say the cars are quite similar,” he said when asked to compare the two cars.

“The big difference is that I’d been driving that car for about four months before I jumped into it again, where I’ve been driving the IndyCar again, so to come back from that is kind of a culture shock.”

Steve Johnson was on hand at Queensland Raceway, working closely with Franchitti, and ribbed his co-driver by making a bold prediction ahead of the weekend.

“He’s going to nail it,” Johnson said of Franchitti’s hopes.

“He’s going to smoke everyone else out there, and he’s going to go home to his wife with a massive trophy and a massive hangover.”

On a more serious note, Johnson believes the Scotsman will be able to adjust to the touring cars fairly quickly.

“He hasn’t won the Indy 500 three times for no reason. He’s obviously pretty good at what he does, and this is just a different sort of four wheels.

“It’s going to take a little bit to get used to the buttons and the functions, and the way the car handles and reacts.

“He’s raced on the Gold Coast before, so hopefully we can have a good weekend.

“We finished fifth here last year, we’ve been fast each year that we’ve been here, so it’s going to be great.”

According to Johnson, Franchitti’s role will be to learn as much as he can from the team’s regular drivers and engineering staff.

“He needs to have a good sponge in between those ears to take in all the information – probably a bit bigger sponge than James has got,” he joked.

“But seriously, it’s going to be fine. They’re race cars, and you’ve got to find out what they do and don’t like.

“You find your braking points and your grip level, and you’re fine. That’s all you’ve got to do.”