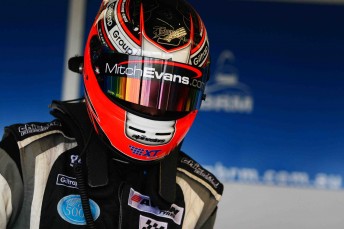 Ahead of this weekend’s Australian Formula 3 title decider at Sandown Raceway, Speedcafe.com.au will talk to the three title contenders as they prepare to fight for one of Australia’s most prestigious racing awards – The Gold Star. Today we talk with New Zealand sensation Mitch Evans.

Mitch Evans may be just 17, but he is hoping that a wealth of experience will put him in the best possible position to win the Formula 3 Australian Drivers Championship at Sandown this weekend.

Currently second in the championship, Evans only returned from Europe on Tuesday this week having completed a multi-day GP3 Series test with the MW Arden, a team co-owned by Evans’ mentor, Mark Webber.

Melbourne’s Sandown Raceway was also last year the scene of the then 16-year-old’s emphatic F3 debut, bursting onto the scene with a win in the prestigious SuperPrix race in just his second-ever start.

He followed up that feat with a win in the New Zealand Toyota Racing Series last summer, however Sandown will be the first track this year he visits where he has previous ‘wings and slicks’ experience.

“At all the other rounds we have been to this year, Ben (Barker, BRM team mate and title rival) and I have had to learn the track in these cars. It’s been an equal playing field between us,” he said.

“This weekend is the first time I will have been to a track in one of these cars so I can draw on that experience and use it to my advantage. That gives me a lot of confidence ahead of this weekend.”

A strong performance in his GP3 Series test has also given the young Kiwi a boost ahead of his title fight in Formula 3.

“The test with MW Arden was really successful,” he said.

“They are a great team – I learned so much there in just a few days and it was a great challenge. I was pleased to end up where we were (6th) because at one stage there was less than a second covering 27 cars. If you found half-a-tenth you could go from where I was to third, so it’s super competitive.

“I think that will help me find more within myself and the car for this weekend so I’m going to work on using that to my advantage.”

With three races set to decide the title, Evans believes he needs to take a methodical, step-by-step approach to winning in order to build a strong performance across the entire weekend.

“We need to be really strong and build everything up into the last race of the championship because that’s the one that counts,” Evans said.

“We need to keep it clean in the sprint races and then put ourselves in a position where we can capitalise in the main race because it’s basically double points. Qualifying and setting fastest laps in each race will also be crucial because those bonus points are so valuable.

“Sandown is a technical track and requires a lot of commitment but after last year I know what it needs. I know how to go quickly and be successful there.

“I need to draw on that as much as I can to find more from within myself and the car.”

The final round of the F3 Australian Drivers Championship will be contested alongside the finale’ of the Shannons Nationals at Sandown Raceway this weekend. Other categories competing are Shannons V8 Touring Cars, the Commodore Cup National Series, the Kerrick Sports Sedan Series, the Australian Saloon Car Series and the Porsche GT3 Cup Challenge presented by Mission Foods.