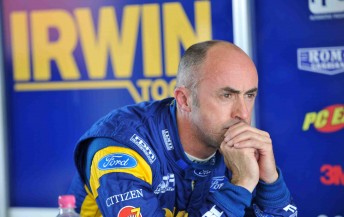 While the 2009 Le Mans 24 Hour winner is the only international to have competed in the L&H 500 at Phillip Island and the Supercheap Auto Bathurst 1000 ahead of the Gold Coast event, Brabham was busy at the test day working on set-up changes for the IRWIN Tools Ford.

According to Brabham, the team had planned on using the day to try a variety of set up changes – to be run in back to back comparisons by both Brabham and regular driver Alex Davison. However, most of the Stone Brothers Racing’s planned testing was thwarted by the day’s heavy rain.

“Some of the changes we’ve made were positive, we’ve just got to maximise what we’ve got now, but with the weather we didn’t get a great deal of time to do that,” he told Speedcafe.com.au.

“I think everyone in pitlane is frustrated, because you get so little time in these things. Even the regular guys, they’d like to do more testing.

“We found some positive things, but we need to maximise them now.

“On a positive note, the car’s pretty nice in the wet – it’s fairly quick.”

Ahead of tomorrow’s first day of practice at the Armor All Gold Coast 600, Brabham said that it is too hard to tell where the #4 car will be in the order.

“I’ve always enjoyed street circuits, but we won’t really know where we are until we get there,” he said.

“Some of the things that we’ve worked on set up, we are hoping will help us on a street circuit. But we’ll have to wait and see. We’ve still got to find a little bit more pace, but there are areas in the corners where I’m struggling, and we need to fix that a bit more with the set up. But the changes we’ve made through one area have hurt on another.”

After finishing 10th and 13th at the Phillip Island and Bathurst endurance races, Brabham said that the team was dissatisfied with their results.

“As a team, I think we were disappointed. We had higher expectations,” he said.

“All three cars just weren’t quite there. We were struggling quite a lot on the straight for whatever reason, which hurt us obviously.

“But in terms of my own performance, I think I worry too much about trying to get the car right, and not focus on my driving. When the car was in the groove, I as in the groove. I wasn’t miles off Alex, we were doing fairly similar times, but we were just slow.”

Brabham, Davison and the rest of the V8 Supercars stars will be on track for the first practice session for the Armor All Gold Coast 600 at 10.15am tomorrow.