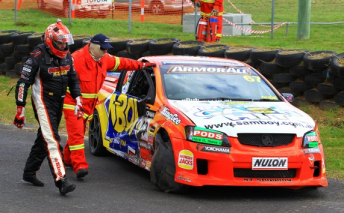 Paul Morris drove the Samboy Ute at Bathurst – and had some difficulties ...

Tim Blanchard will make his Yokohama V8 Utes debut this weekend on the streets of Surfers Paradise, supporting the Armor All Gold Coast 600.

Blanchard, currently fourth in the Fujitsu V8 Supercars Series, will drive the Scott Jennings-owned Holden Commodore Ute, prepared by Paul Morris Motorsport. The car will be supported by Samboy Chips and Hungry Jacks.

Blanchard drove for the Morris team at the L&H 500 at Phillip Island with the PMM team, and now takes a new direction with the team, driving a ute.

Jennings has offered the seat to Blanchard after he took up a new role as commercial manager for PMM.

“That unfortunately doesn’t allow time to compete in my own car for the remainder of the 2010 V8 Ute Series. We had to put somebody in the car and Tim’s name came up; it’s widely known that he’s one hell of a driver. I think he’ll do very well.”
Jennings says that Blanchard will need to take his time getting used to the car and the track.
“There won’t be a lot of room out there,” says Jennings.

“So he’ll have to feel his way around a bit to begin with but I’m sure that once he gets the hang of it and hopefully finds some racing room he’ll be fine.”