Villeneuve: Ambrose has given me V8 advice

Villeneuve: Ambrose has given me V8 advice 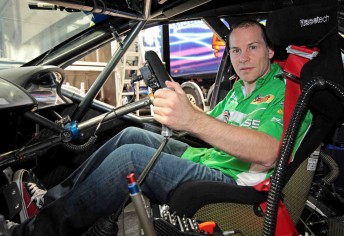 Jacques Villeneuve, arguably the Armor All Gold Coast 600’s most sort-after international driver, says he has spoken to former V8 champion Marcos Ambrose about how to make a V8 Supercar go fast.

The 1997 Formula One world champion will suit up alongside Paul Dumbrell in the #55 The Bottle O Racing Ford Falcon and is keen to impress on his V8 debut this weekend. He is so willing to shine that he tracked down Australian NASCAR star Ambrose at a recent NASCAR round to gather advice.

“I’ve been speaking with Marcos Ambrose in America a little bit about them and I’m very excited,” he said.

“As a driver you always want to search for your limits but at this place you can’t afford to find your limits because you’ll find yourself in the wall.

“You need to learn where the limit is and in between walls, it makes it a little bit more difficult but also makes it more exciting as well for us drivers and for the fans.

“Sitting on the wrong side of the car and using my left hand to shift is going to be very different. That’s something that is a bit of a worry and a stress but it should be fun out there, they’re big fast powerful cars – a bit like a NASCAR basically.”

Villeneuve got his first taste of V8 Supercars today, getting a seat fitting in the #55 green and white Ford.

The French Canadian knows that the world will be watching his efforts this weekend and doesn’t want to disappoint.

“The Gold Coast event is always one of the ones that everyone in the world looks at,” said Villeneuve.

“At this time of the year it’s also great to get out of the cold in Montreal and head to the sun like we are enjoying here today.”

Villeneuve, along with the other 17 international drivers, will get their first taste of Queensland Raceway today for a special test day.

The test day will see only 18 cars on the track, with the international drivers and the car’s ‘Primary’ driver the chance to do unlimited laps. There is no restriction on the amount of laps that either the international or primary can do.

Stay tuned to Speedcafe.com.au for the latest news from Queensland Raceway.