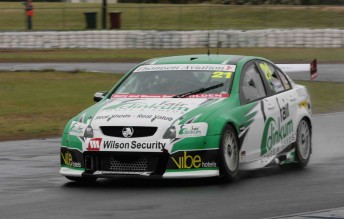 Fabrizio Giovanardi is aiming for a top 10 finish at the Armor All Gold Coast 600 this weekend after the recent turn of form for the Fair Dinkum Sheds Racing Commodore VE.

Giovanardi, a two-time British Touring Car champion, has competed in V8 Supercars before, racing with TeamVodafone in the 2008 endurance races.

This weekend, he’s up for a new challenge with Karl Reindler in the #21 Brad Jones Racing-prepared Commodore VE and is confident that the pair can spring a surprise, given Reindler’s solid run at the Bathurst 1000 two weeks ago.

Reindler and co-driver David Wall were on track for a career-best top 10 result, but a bad set of tyres is being blamed for the car slipping to an eventual 14th place.

Giovanardi said that while he isn’t familiar with Reindler personally, he has been keeping track of his results.

“I don’t know Karl at all. I’ve seen some of his results during the season and I believe he has been building up,” he told Speedcafe.com.au.

“I think we can go quite well. This car finished 14th at Bathurst and they were quite competitive during the race. I think with a safe race, we can be in the top 10.”

The Italian says that he loves the power that he has to play with in a V8 Supercar.

“I like to have powered cars that are difficult to drive,” he said.

“I expect to make a safe race for the car, for the team and make a good result.

“I’ve driven these cars before, that was too far away now. That was a Ford, this is a Holden, so I can not compare. That is too far ago for my memory! It’s all new.”