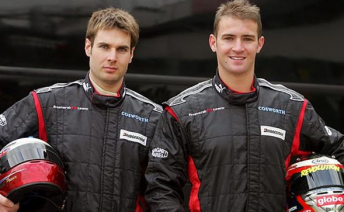 Australian IndyCar star Will Power will reignite an old rivalry this weekend at the Armor All Gold Coast 600.

Back in 2001, Power and Will Davison went wheel-to-wheel in the Australian Formula Ford Championship. Davison ended up winning that battle before the pair embarked on an overseas open-wheel future.

They competed against each other in the British Formula 3 Championship in 2003, before their ultimate showdown in November that year – testing a Minardi Formula One car at Misano, Italy, thanks to an invite from Australian Paul Stoddard.

Even though they didn’t race against each other that day, the battle for the best lap time was intense.

Who went fastest? No official times were released, but folklore says that Power was marginally quicker – although their were astericks to that result …

Race drivers and their excuses!

Ahead of this weekend’s Surfers Paradise street race, Power, who will pair with Steve Richards in the Dunlop Super Dealers FPR Falcon, is looking forward to renewing the old battle with the now Toll Holden Racing Team driver …

“I definitely had some great battles with (Jamie) Whincup and Will Davision in Formula Ford, and (Mark) Winterbottom was coming through the ranks as well,” he said.

“I remember having some battles with Andrew Jones, Michael Caruso and Luke Youlden, but especially Will Davison, Whincup and I. They were good times.

“Davo and I get along well now, but it will good to get back on track with him.”

While Power is inexperienced in a V8 Supercar, he isn’t a rookie. He made his V8 debut with Mark Larkham at the Queensland 500 in 2002, finishing 11th. He also competed at Bathurst that year.

“Obviously I’m not got to have long to get to know the car, I’m going to have to catch on pretty quick,” Power said.

“I vaguely remember what it was like in 2002 – the one thing that does stick in my mind was that Bathurst is an unbelievable track. They are tough machines to drive and get used to, but overall, it was a good experience.

“I think of all the different tracks I’ve had learn over the last few years and different sorts of cars that I’ve driven, it will hold me in good stead at the Gold Coast.

This weekend’s Armor All Gold Coast 600 will be a showcase of some of the world’s best driving talent – and Power knows it. He mentions at least three drivers that he once looked up to.

“Mark Skaife is one guy when I watched when I was coming through the ranks. I always looked up to him,” he said.

“Guys like Jacques Villeneuve when I was a kid, he was winning the World Championship and the Indy 500 – he seemed like God to me.

“Even (Helio) Castroneves, he’s my team-mate now. I remember when I was racing Formula Ford at the Gold Coast and Helio was racing IndyCars. I used to look up to them and now I’m rubbing wheels against them. I guess it is funny how things work out.”