What is the best Bathurst one-two?

What is the best Bathurst one-two? 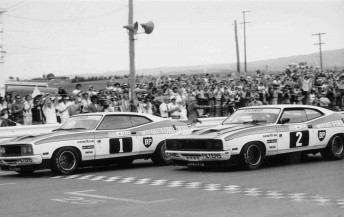 There is considerable debate over what is the best-ever one-two finish at Mount Panorama – Ford’s 1977 domination, the Holden Dealer Team’s 1984 crush or last week’s TeamVodafone effort.

According to Speedcafe.com.au readers so far, the 1977 race is the most popular, chalking up more than 50 percent of the votes in this week’s Pirtek Poll.

Allan Moffat, the winner of the Ford 1-2 at Mount Panorama in 1977, will lead former team-mate Colin Bond across the finish line again this weekend at the Armor All Gold Coast 600 as part of the Pirtek Australian Legends. The pair will take part in a reenactment of their classic Bathurst finish.

According to Moffat, it is the most significant moment in local motor racing.

“That day in 1977 was something pretty special and it is fantastic that fans will have the chance to see it re-created on the streets of the Gold Coast thanks to the Bathurst City Council and David Bowden,” he told The Gold Coast Bulletin. 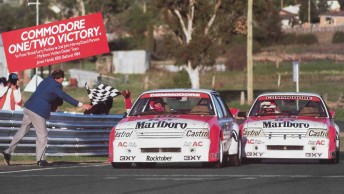 “Those two cars stir the emotions of Australian sports fans like no other and to think we will have them out on track together after 33 years is something you have to stop and think about for a minute.”

But how could anyone forget the 1984 HDT 1-2 – the last race for Australia’s popular ‘Big Bangers.’

It was one of Holden’s great Bathurst victories, with the #05 Commodore of Peter Brock and Larry Perkins finishing two laps ahead of John Harvey and David Parsons.

In a Speedcafe news article last week, TeamVodafone boss Roland Dane spoke of the significance of his team’s one-two at Mount Panorama last week. CLICK HERE for the story. 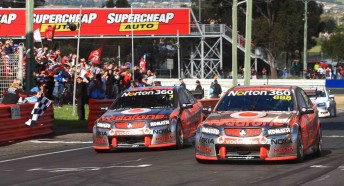 Dane mentioned in the story that ‘imagery’ is the key to a one-two finish being remembered as one of the great results. He argued that the HDT 1-2 did not have the images to go with the result.

“The reason why people don’t automatically think of 1984 HDT 1-2 because there’s no great imagery of it, and the fact that one car was two laps ahead of the other,” Dane said last week.

This statement caught the attention of Holden Motorsport’s former public relations boss Tim Pemberton. As soon as ‘Plastic’ saw the story, he jumped straight into his 30-odd year box of archives to dig out the image of Brock leading Parsons across the finish line in 1984.

As you can see, with the sun in their eyes, Brock can’t even see where Parsons is, and truth be known, Parsons almost ran into the back of Brock as they cross the finish line!

“Roland Dane’s statement that the Holden one-two Bathurst result of 1984 “lacks imagery” can only be seen as the view of a bloke who wasn’t around then and doesn’t know now!” Pemberton says.

“Holden ran double page magazine adverts and printed 10,000 posters of the finish line image for the fans that was as good or better than the Triple Eight team effort this year.”

Better or worse, Holden fans will look back on the 1984 and 2010 ‘Great Races’ as one of their favourites.

For Dane, he regards it as the best day of his motorsport life.

“In terms of motorsport and my life in motorsport, that would be as good as it gets,” he told Speedcafe.com.au.

“It was absolutely superb, spell-binding moment. We’re still not really across what we’ve done yet because so much has been going on and we’ve been so busy. Hopefully sometime in the future, we’ll be able to kick back and enjoy it.”

So, what is the best Bathurst one-two result? Vote now on this week’s Pirtek Poll …