Pretty slots in beside Pruett for Gold Coast

Pretty slots in beside Pruett for Gold Coast 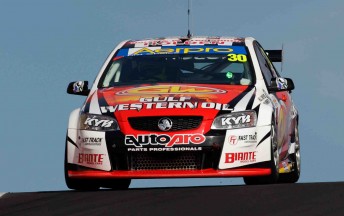 Nathan Pretty will compete with Scott Pruett in the Gulf Western Oils Commodore VE at this weekend’s Armor All Gold Coast 600.

Pretty drove with Mark Noske in the V8 Supercars endurance races at Phillip Island and Bathurst, with Noske originally scheduled to drive with the American sportscar driver. However, team owner Lucas Dumbrell has decided to slot Pretty into the car.

While Pretty has a lot of V8 Supercars experience, it has generally been limited to Sandown, Queensland Raceway, Phillip Island and Bathurst – the homes of V8 endurance races over the past decade.

Dumbrell told Speedcafe.com.au that it was a “toss of the coin” between Pretty and Noske.

“I don’t want to take anything away from Mark – he did a great job as well,” he said.

“They both did an absolutely terrific job for me. It was really a toss of the coin. They were both about the same pace. Mark was a bit quicker than Nathan at Phillip Island and Nathan was a bit quicker at Bathurst. I was happy with the job they did.

“I think Nathan will suit the Gold Coast track and the whole event. Nathan has a lot of miles in V8s over the years, and I think he’ll do a good job.”

“And Pruett is underrated. He has raced these cars before (ED: Bathurst 1997 with Stone Brothers Racing) and I reckon they’ll do a great job. I think a lot of these open wheel international stars will struggled and be confused that they’re in a big monster, compared to what they generally race.”

Pruett and his wife Judy arrived on the Gold Coast yesterday ahead of this weekend’s international-flavoured Surfers Paradise street race.

The former Gold Coast Indy race winner will get his first chance to drive the #30 Gulf Western Oils Commodore in a special test day for the international drivers at Queensland Raceway on Wednesday.

“It is great being back here, it is hard to believe the first time I came to Australia was back in 1991 some 20 years ago,” said Pruett.

“To be back on the Gold Coast and to be getting set to race on this track in a V8 Supercar is pretty exciting, I think its going to be incredible.”

The Armor All Gold Coast 600 proper kicks off on Friday with four practice sessions. Saturday and Sunday will both see a qualifying and a 300km race.