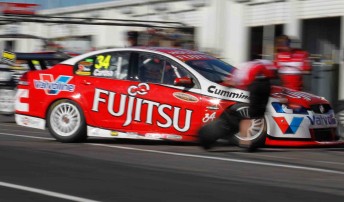 American Porsche star Patrick Long will enter this weekend’s V8 Supercars international Armor All Gold Coast 600 with a slight advantage – he has tested a V8 Supercar … sort of.

On a windy, wet and all-round miserable Winton day, Long drove the ride car to get invaluable laps in a car that will be similar to what he will drive on the Gold Coast this weekend.

He will share the seat with Michael Caruso in the revamped Surfers Paradise street race.

All of the 18 international V8 drivers will get to conduct a special test at Queensland Raceway on Wednesday, but prior to that, only a handful of them have driven a current V8. 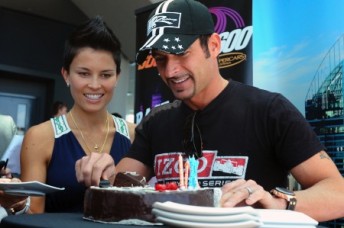 David Brabham (IRWIN Racing) and Ryan Briscoe (Toll HRT) drove at Bathurst, while Tiago Monteiro (Centaur Racing) is the only other driver to have tested a modern V8.

Team boss Garry Rogers told Speedcafe.com.au that it was only a small advantage for Long to get a chance behind the wheel of Australia’s unique race cars.

“He only drove our ride car on a very wet day,” Rogers said. “It was a bit meaningless, really.

“He has driven many race cars before and sat on every side of a car, so he’ll know what to do this week.

“I made my decisions on what I thought about Patrick months ago, and he has done a fair amount for not only Porsche but Penske too, and his organisation isn’t a bunch of fools.” 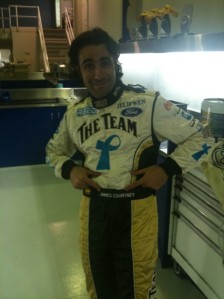 Long arrived in Australia last week, spending some time in Melbourne before he heads to the Gold Coast. Other international drivers to have touched down in Australia include Scott Pruett (Gulf Western Oils Commodore), Alex Tagliani (Rock Racing Commodore) and Dario Franchitti (Jim Beam Racing Falcon). Via Twitter, James Courtney set out an image of Franchitti trying on one of his race suits.

Franchitti will team up with Steve Johnson in the #17 Jim Beam Falcon, while championship leader Courtney will share his ride with regular co-driver Warren Luff.

V8 racing proper kicks off on the streets of Surfers Paradise this Friday.