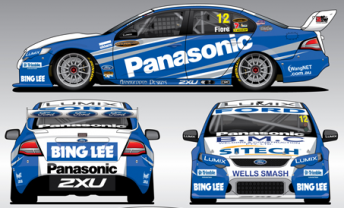 Panasonic will take prime position on the doors of Dean Fiore’s Triple F Racing FG Falcon at this weekend’s Armor All Gold Coast 600.

Panasonic replaces Bing Lee for this round only at this stage. Bing Lee will return later in the year, depending on both company’s promotion and business activities from state-to-state.

The livery change announcement comes a day before Gianni Morbidelli arrives in Australia for the Armor All Gold Coast 600, where 18 international stars from all across the world compete in this special event on the streets of the Gold Coast.

Each international driver will be sharing a seat with a regular driver from each V8 Supercar team, with two 300km races making up the third endurance event alongside the L&H 500 Phillip Island and the Supercheap Auto Bathurst 1000.

The international stars will have a designated test day at Queensland Raceway this Wednesday, which will enable Morbidelli to get accustomed to the #12 FG Falcon.

The Armor All Gold Coast 600 kicks off on Friday with four practice sessions, ahead of a qualifying session and a 300km race on both Saturday and Sunday.