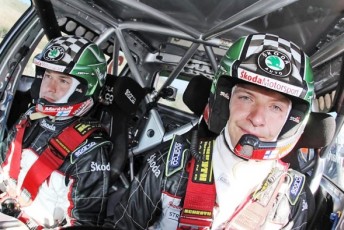 Finland’s Juho Hanninen produced a champion’s drive to see off the opposition and win the 2010 RACMSA Rally of Scotland, the penultimate round of the 2010 Intercontinental Rally Challenge (IRC), although there was drama further behind on the final day of the event.

Hanninen took over first position on the second day’s stages when British hopes, Peugeot’s Kris Meeke and his own Skoda team-mate Guy Wilks, hit problems having taken turns in the lead. From there the Finnish ace was never headed, although he had to work hard to keep Norway’s Andreas Mikkelsen at bay on the final day’s closing four stages.

Meeke, who lost more time on the final day with a puncture, still took third position meaning a podium on his last outing for Peugeot. Furthermore, the result has guaranteed him third in the final 2010 IRC points standings.

In the end, Hanninen’s winning margin over Ford driver Mikkelsen was just 25.5s after 200km of competitive timed stages.

Hanninen’s victory, his third of the season, was the perfect way to celebrate having been recently crowned the 2010 IRC Champion.

“Even with Guy and Kris’s problems yesterday, I knew the rally was far from over – Andreas was driving very well and staying close behind,” said Hanninen.

“But on the penultimate stage today I decided to attack. I knew we still had to go through the Loch Ard stage again at the end which is very long and can cause some problems – I wanted some breathing space so I could just take it a little bit easier and it worked out. I’m very happy with this result because this is a fantastic rally.”

Although Wilks was forced to retire from the event on Day 2, he – along with Scottish hero Alister McRae – returned to action today under ‘Superally’ rules so as to at least put on a show for the public. And nor did he disappoint, the 2009 winner setting the pace on both runs through the fearsome 30km Loch Ard stage with some sensational driving and demonstrating what might have been had he enjoyed a trouble-free rally. Fittingly, his spirited performance earned him the event’s ‘Colin McRae IRC Flat Out Trophy’ – among the judges who voted for him was the late rallying legend McRae’s father Jimmy, himself a former great of the sport.