Adrian Burgess to lead TeamVodafone in 2011

Adrian Burgess to lead TeamVodafone in 2011 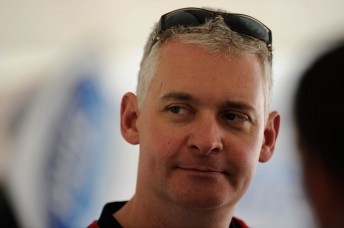 Adrian Burgess will leave Dick Johnson Racing at the end of this season to become team principal of TeamVodafone in 2011.

Burgess’s new role will see him take over the day-to-day running of the Bathurst-winning organisation, with team owner Roland Dane taking a less hands-on role.

Burgess will start his new position at the Queensland-based team at the end of this year.

The Englishman joined Dick Johnson Racing in 2006 and has taken the team from a mid-field outfit to the top of the championship.

Losing Burgess is a major blow for the embattled DJR squad, which is still to resolve the ownership issues that have plagued the team over the past two weeks. Dane told Speedcafe.com.au that signing Burgess allows him to focus his energies on growing his outfit.

“I want to be able to make sure that I’ve got enough time to concentrate on some other aspects of the business,” Dane told Speedcafe.com.au.

“I want to expand what Triple Eight does. I also want to give more attention to our commercial side alongside Peter Jamieson (Triple Eight Commercial Manager). To do that, I need to free up some of my time in the day-to-day running of the race team.

“I don’t want to think that I’m the only person who can do it. I need to make sure the team is as bullet proof as possible. Having someone like Adrian in there will make us stronger, and I think we’ll be able to compliment each other.”

Burgess told SpeedCafe that he is looking forward to starting his new role at the leading V8 Supercars team, but for the time being, is solely focused on securing Jim Beam Racing its first championship in 15 years.

“First and foremost, my job at the moment is to make sure I deliver a championship to Dick Johnson Racing,” Burgess told SpeedCafe.com.au.

“My loyalty is to DJR here for the rest of the year, I want to try and beat every team we can and try and win this championship. I wouldn’t do anything to change that.

“Roland is in the middle of restructuring his business. He wants to generate himself some more time to work on the business ventures of Triple Eight. I’m going to take the position of team principal of Triple Eight to focus on the day-to-day running of the race team.

“It will allow Roland to look into other projects and other areas of the business. He currently doesn’t have time to do that because he is too hands on with it all.

“Running TeamVodafone will become my responsibility, but again, my job for now is trying to win this year’s championship with James (Courtney) and DJR. We’ve come too far to lose sight of our goal.”

With Burgess’s plans now confirmed, attention now turns to Courtney’s driving future. Like Burgess, he has been linked with a move to a new team since news of the DJR ownership issues broke. But at this stage Courtney has stated that his future will be decided by British-based manager Alan Gow when the time is right.

Burgess was instrumental in securing Courtney as a driver at Dick Johnson Racing in 2009. Speedcafe.com.au understands that on this occasion, Burgess made his decision totally independent of Courtney’s future.