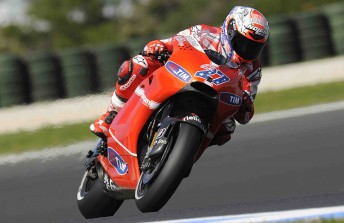 Casey Stoner has won his fourth Australian Grand Prix in-a-row, leading every moment of the race at Phillip Island today.

The Ducati rider held the lead right from the start, edging out Yamaha rival Jorge Lorenzo into turn one and building on his lead, eventually finishing with a 8.6 second lead.

Stoner’s win had moved him from fourth to third in the world title. He now sits 23 points behind Dani Pedrosa,

Stoner’s victory puts him second on the all-time list of wins at the Australian Grand Prix, just one behind Valentino Rossi.

Lorenzo took a lonely second place ahead of Rossi who enjoyed a splendid late dice with Nicky Hayden. Rossi finished the first lap in eighth place but chipped his way through to be third. Hayden got back past the Italian, only for Rossi to make an aggressive move stick at Honda Corner on the last lap, holding out the Texan.

It was a great late dice, and the best thing is that the pair will be team-mates next year at Ducati …

It was a disastrous day for the factory Repsol Honda team. Pedrosa pulled out of the event early while he continues to recover from a broken collarbone, while Andrea Dovisioso was out early with a mechanical drama.