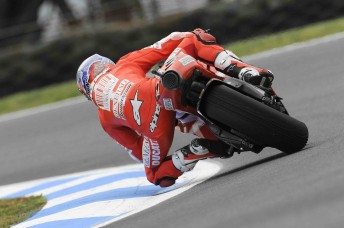 For the 21st time in his career, Stoner will start from pole position as he aims to create history by winning four race in-a-row at Phillip Island.

The session was held in the dry with rain only hitting the track right at the conclusion of the one hour session.

Ducati’s Stoner, who is celebrating his birthday today, was the standout of the session, clocking a time of 1m30.107s, more than six tenths ahead of new world champion Jorge Lorenzo (Fiat Yamaha).

Splitting the Tech 3 machines is Marco Simoncelli (San Carlo Honda Gresini) and the best of the Italian riders.

Honda’s Dani Pedrosa had a difficult session, finishing 15th – more than three seconds down on Stoner. Pedrosa is still recovering from a broken collarbone while fighting to maintain his second place in the MotoGP championship.

Hector Barbera and Loris Capirossi both had incidents during the session.