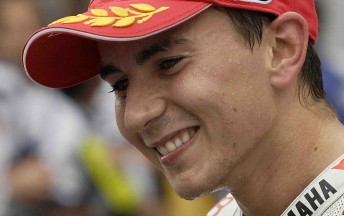 New MotoGP world Champion Jorge Lorenzo has set the pace in the opening practice session ahead of this Sunday’s Iveco Australian Grand Prix at Phillip Island.

After a delayed start due to heavy wet weather conditions at the Victorian circuit, the Fiat Yamaha rider was the quickest man, setting a time of 1m41.146s.

Australian hero Casey Stoner was next best, 0.334s down on Lorenzo’s time.

Stoner’s American Ducati team-mate Nicky Hayden was next in the list – 0.151s off Stoner.

The fastest of the times were set late in the one hour session as a dry line formed.

Marco Simoncelli was fourth as the San Carlo Honda Gresini rookie battled rear grip to set a best time of 1m41.881s, with his team-mate Marco Melandri fifth. Melandri was the final rider to get within a second of Lorenzo.

Repsol Honda’s Andrea Dovizioso, one of four men fighting for second place in the world title, completed the top six.

Back on track for the first time since he fractured his collarbone in Japan exactly two weeks ago was Dani Pedrosa. The Honda rider completed seven laps before concluding his session just before the half-hour mark having posted a best time of 1m51.210s.

Ben Spies (Monster Yamaha Tech 3) completed just three laps in the session and opting to avoid any unnecessary risks on a track on which he won a WSBK race last season.

Qualifying for the Iveco Australian Motorcycle Grand Prix will be held tomorrow at 1.55pm.

ONE HD will cover the qualifying session live. Check your local guides for full details.