Surf will be up for Gold Coast: Sports Minister

Surf will be up for Gold Coast: Sports Minister 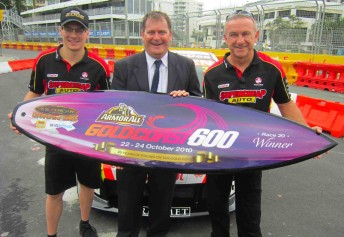 Will next weekend’s Armor All Gold Coast 600 be the greatest touring car race the world has seen?

Reeves was on hand this morning, announcing the reunification of the Perkins/Ingall names.

With the final construction of the revamped circuit taking place, Reeves says that the new ‘international’ flavoured event is set to be a huge boost for the Gold Coast.

“This event will be great for the fans, fantastic for the drivers and a real high-octane boost for the Gold Coast economy,” he said.

“The Queensland Government has made a $6.5 million investment into this new-look event and it makes it worthwhile when we can include unique announcements like this, which will bring focus to Queensland from around the world.

“The Gold Coast is famous for fun and it will be the party capital of Australia next week when some of the world’s greatest drivers and entertainment acts come together for a spectacular we won’t forget.”

The Armor All Gold Coast 600 track action kicks off next Friday.