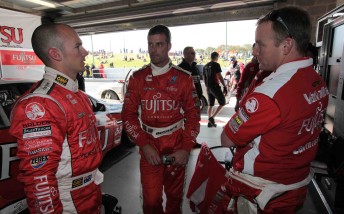 Ritter, who partnered Michael Caruso in the sister Fujitsu Racing Commodore VE at Phillip Island and Bathurst, will team with Holdsworth at the revamped street race.

Caruso will be joined by American Porsche star Patrick Long for the international-flavoured event.

Besnard was originally slated to remain with Holdsworth for the Gold Coast 600, but after a race-shattering drive-through penalty in the closing stages of last week’s Supercheap Auto Bathurst 1000, the Garry Rogers Motorsport team has elected to slot Ritter into the #33 Commodore.

Holdsworth and Besnard were on track for a podium finish at Bathurst until Besnard was pinged for speeding in pit lane. The car was forced to serve a drive-through penalty. 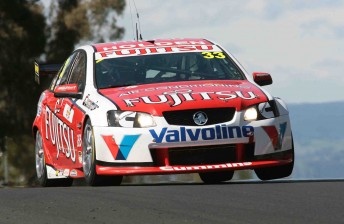 Lee Holdworth in the #33 Fujitsu Racing Commodore VE at Bathurst

Holdsworth was poised to double-stint the car to the end of the race and challenge for the win, but in the haste to get the car back to the front, the team put a ‘less-than-desirable’ set of Dunlops on the car.

The #34 car of Caruso/Ritter finished in 10th place.

Holdsworth told Speedcafe.com.au that Ritter is the ideal man to partner him at Surfers Paradise.

“Greg is a very experienced driver. He comes out twice a year and does an amazing job for our team,” Holdsworth told Speedcafe.com.au.

“Now he has a third opportunity to drive for us, and I think we should have a strong result, especially after the great run we were having at Bathurst. I’m feeling confident about the rest of the year.”

After going so close to a big result at Bathurst, Holdsworth refused to be dejected about what unfolded at Mount Panorama, preferring to focus his energies on the rest of the year.

“It was frustrating to get that close and to have a silly mistake,” he said.

“I’m looking forward to getting back in the car. I’m just so confident after Bathurst – in both my car and my driving. Ritter knows that track up there quite well too. I can’t wait to get into it.

“The team really needs to not dwell on this too much. There were a lot of positives that we can take from this into the future.

“I’m glad there’s no break between Bathurst and the Gold Coast because it will allow us to get into it and get a result.

“I think that Ritter and I have a good shot at a top three.”

Holdsworth said that the Armor All Gold Coast 600 will be a fight for survival with the added edition of 18 international drivers teaming up with the V8 Supercar regulars.

“I reckon the meeting will be an exciting race for the spectators,” he said.

“It will be exciting for us drivers too. They’ll probably be a few accidents, maybe more so than any other years. There’s always plenty of action there anyway …”