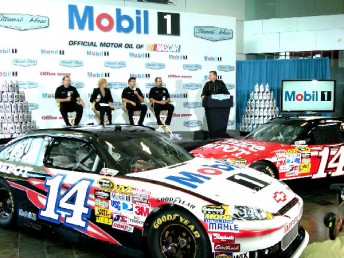 Just days after winning the Pepsi Max 400 at Auto Club Speedway in California, Tony Stewart has confirmed that Mobil 1 will join his team as a primary sponsor in 2011.

Mobil 1 will replace Old Spice as the co-sponsor of Stewart’s #14 Chevrolet, sharing the bonnet and rear quarter panel with current backer Office Depot.

Mobil 1, also the official motor oil of NASCAR, currently backs the #77 Penske Racing Dodge of Sam Hornish Jr, but was forced to look for a new home for next season following Penske’s new deal with Shell and Pennzoil for 2011 with driver Kurt Busch.

“With Mobil 1’s long tradition of partnering with world-class race teams around the globe, we are proud of our new association with one of NASCAR’s top drivers,” said Nigel Searl, vice president marketing, ExxonMobil Lubricants & Petroleum Specialties Company.

“We look forward to helping Stewart-Haas Racing secure a Sprint Cup Series championship and add to the list of successful teams that Mobil 1 has supported for more than 30 years.”

Stewart was pleased to confirm the addition of Mobil 1 to his team’s sponsorship portfolio, which already includes Office Depot, Burger King, the US Army and Tornados.

“As a team owner, I’m absolutely thrilled to add such a respected technology partner to our race team,” said Stewart, co-owner of Stewart-Haas Racing with Gene Haas. 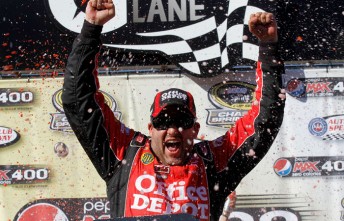 Stewart, one of the best dirt track racers in USAC history before switching to IndyCar and ultimately NASCAR, dedicated his win to injured USAC front runner Shane Hmiel.

Hmiel is a former NASCAR rising star but was banned for life after returning a third positive drug test earlier this decade.

After rebuilding his life off-track he has been a regular winner in USAC classes recently, so much so that he was considered a future IndyCar star by new IndyCar CEO Randy Bernard.

But he is currently in a critical condition in Methodist Hospital in Indianapolis after a sickening wreck at the fast Terre Haute track in Indiana, when his Silver Crown car bicycled and made heavy, roll cage first contact with the wall, causing head and spinal injuries.

“I’ll be honest, when Shane started running sprint cars and midgets and silver crown cars, it was like, ‘oh man, this could be very interesting’ because he had never really ran those types of cars, he had never raced on dirt,” said Stewart.

“But he just never was scared of it, he never backed down from it, he said ‘I’ve got to learn at this’ and he has given 110 percent ever since day one.  He’s really turned into a great open wheel driver.

“But you know, it’s something that doesn’t happen a lot in open wheel racing. It was just a freak accident that happened, and the way that he crashed was the way he hit the concrete wall was not too many guys hit like that. But it was a devastating hit, and obviously his injuries reflected that.

“That’s why we mentioned it in victory lane. Definitely our thoughts are with him right now for sure.”

Australian Marcos Ambrose suffered from poor handing at the 2.0-mile oval, resulting in two spectacular spins that caused him to lose time with flat tyres.

Ambrose finished the day in 33rd place, leaving him 26th in the points standings, but in a positive sign for 2011, Kasey Kahne finished in fourth place in the #9 entry of Richard Petty Motorsports, the car Ambrose will drive next season.

“It was a wild ride out there today,” said Ambrose.

“We threw everything at the car to try and gain some more grip, but it was difficult.

“It spun out twice, and the damage from the flat tyres effectively ruined the day.

“We’re going through a tough time at the moment, but we can turn it around at Charlotte next week.”

The Chase for the Sprint Cup will race on NASCAR’s home soil this weekend when the Bank of America 500 is held at Charlotte Motor Speedway.