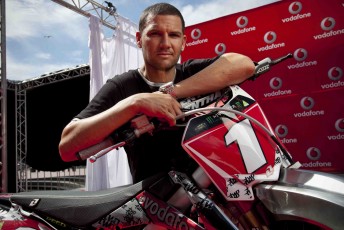 Multiple World Supercross and Super X Champion Chad Reed will get more testing miles in V8 Supercars after being announced as an official member of TeamVodafone.

Originally from Newcastle, Australia’s leading dirt bike export has dominated the Supercross and more recently, outdoor motocross scene in the United States for close to a decade, as well as winning back-to-back Super X titles in Australia.

As part of Reed’s new deal with the Bathurst winning team, he will get more testing miles with the team, having tested for them at Queensland Raceway two years ago.

The 28-year-old was joined by V8 legend Mark Skaife at Darling Harbour to pull the covers off his race bike, showcasing a livery that draws heavily on the unique chrome and rocket red livery of the TeamVodafone V8s – the cars that took an historic one-two at Mount Panorama last weekend.

Reed will get his first chance to race his 450cc Vodafone-backed machine for the opening round of Super X, taking place at Newcastle’s Energy Australia Stadium this Saturday. 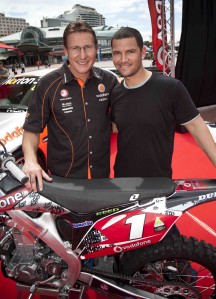 “I am really excited to be racing under the TeamVodafone banner for this weekend’s event,” said Reed.

“I have had enjoyed a strong relationship with the team for the past four years and follow their progress closely through the telecast in the US and on the internet.”

Reed has long been touted as a future V8 driver, when he decides to end his successful riding career.

“It has been two years since I drove a TeamVodafone V8 Supercar, the cars have come a long way and the team has switched from Ford to Holden,” said Reed.

“The experience was a rush. I learnt a lot with every lap and look forward to any chance I may get to test the new Commodores.”

TeamVodafone Principal Roland Dane was excited to welcome the World Champion to the team in an official capacity.

“Chad is one of Australia’s greatest sporting stars and his profile and achievements are held in high regard across the world,” said Dane.

“We’re pleased to have him on board as a member of TeamVodafone and are thrilled that he has decided to run a livery that reflects our race cars.

“In the past he has shown he is more than capable on four wheels as well as two, and we look forward to providing him with further testing opportunities aboard our Holden Commodore.”