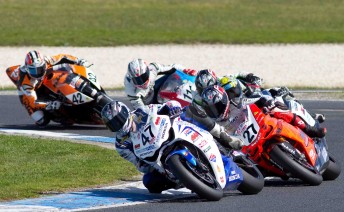 The Australian Superbike Championship has renewed its deal with naming-rights sponsor The Viking Group, keeping it as its title backer for 2011.

Australia’s premier road race series has enjoyed a season of solid growth with the Superbike and Supersport honours to be awarded in the final round at Symmons Plains next month, supporting the V8 Supercars.

With the support of the transport and logistics company Viking Group, the ASBK has been able to make a number of significant steps forward in 2010 including a standalone event in the Northern Territory, the revival of ‘2+4’ races alongside V8 Supercars and television coverage including a first for the sport, a live, free-to-air telecast.

Steve Iliopoulos, Director of the Viking Group, said the company looked forward to further involvement with the championship as its profile continued to grow.

“2010 has been a successful year for the ASBK and we are pleased to confirm our continued naming-rights sponsorship into 2011 which looks set for further growth driven by IEG’s desire to innovate and expand,” said Iliopoulos.

“The championship reached a wide audience this year thanks to the involvement with V8 Supercars, a new and exciting television package and a number of entertaining support classes and activities.

“This additional exposure helps to showcase the Viking Group to new and previously unreached demographics.”

The Viking Group employs over 350 people throughout Australia and is comprised of seven divisions providing services throughout the national transport sector.

Yarrive Konsky, Managing Director of International Entertainment Group, promoter of the ASBK, thanked the Viking Group for its support in 2010.

“The Viking Group has played an instrumental role in the ASBK’s growth during 2010, a season where we were able to make significant steps forward with new events plus racing and live television coverage alongside the V8 Supercars,” said Konsky.

“We believe the momentum gained this season will carry over into 2011 and look forward to continuing a successful relationship with the Viking Group as we strive to build the profile of the championship and its world-class riders even further.”

This announcement comes just days after the IEG welcomed Daniel Hutchinson as the General Manager of the Australian Superbike Championship.

Hutchinson has extensive experience in the motorcycling field and ran the Australian Superbike Championship in the first three years of his tenure with Motorcycling Australia (MA).

The final round of the 2010 Viking Group Australian Superbike Championship will be held at Tasmania’s Symmons Plains circuit from November 12-14.