Walkinshaws to use spares for Gold Coast

Walkinshaws to use spares for Gold Coast 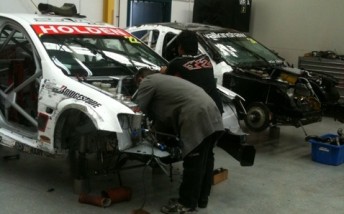 The #22 and #24 Commodores are worked on, but won't be repaired for Surfers Paradise

Walkinshaw Racing will use two of its spare chassis for next week’s round of the V8 Supercars Championship Series at the Armor All Gold Coast 600.

The factory Holden team saw severe damage occur to two of its cars at Bathurst last weekend. Fabian Coulthard was the first to wreck, crashing spectacularly at The Chase on the first lap of the race.

Coulthard’s Bundaberg Red Racing Commodore VE rolled five times in one of the most spectacular crashes at Bathurst of all time.

With Coulthard’s event was run barely before it started, at the other end of the race, Toll Holden Racing team driver Will Davison was sitting in third place, just a handful of laps until the end before he crashed at Sulman Park.

Davison was temporarily knocked out, but was quickly released from the Bathurst medical centre.

Coulthard and Davison will both switch to their older cars for the Gold Coast race. Coulthard will take over the car that Nick Percat raced in the Fujitsu V8 Series at Bathurst last week in Bundy Red colours.

Only Davison’s car will be required to be on track at Queensland Raceway next Wednesday for the pre-Gold Coast test. Davison will share his HRT Commodore with Team Penske IndyCar driver Ryan Briscoe.