Lorenzo: I’m the best rider on the planet

Lorenzo: I’m the best rider on the planet 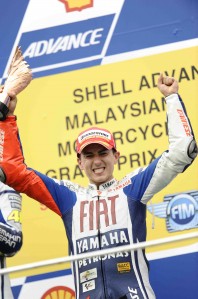 Jorge Lorenzo has declared himself the best rider in the world, after he secured the MotoGP title with three rounds to spare at Sepang last weekend.

Finishing third at the Malaysian circuit, Lorenzo did more than enough to secure his first title.

He told MotoGP.com that the feeling of taking the championship victory is the best.

“It’s a fantastic feeling to know that we are the Champions, the best team, that I am the best rider on the whole planet,” he said.

“For sure it’s only for this year but now we can celebrate it like we are the kings of the world.”

He said that post-race, he struggled to relay his true emotions.

“I couldn’t feel too much because the tension, the pressure, the physical tiredness didn’t help me much to express my emotions and to feel everything,” he said.

“But this is a moment of glory of which I must enjoy every minute, second and hour, and remember it well.”

At Sepang, Lorenzo’s Fiat Yamaha team-mate Valentino Rossi triumphed in incredibly demanding conditions. The Italian proved too strong for his rivals as he recovered from 11th position during the opening lap to take his second win of the season.

Andrea Dovizioso was always applying pressure for the lead, passing Rossi on a number of occasions, but ultimately Dovizioso had to settle for a well-deserved second place and his second successive podium.

Taking the third step of the podium and being crowned the 2010 World Champion was Jorge Lorenzo, who led the early stages of the race before being passed by Rossi and Dovizioso.

The next round of MotoGP is at Phillip Island for the Australian Grand Prix.