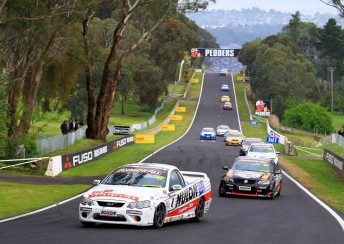 Grant Johnson’s title hopes in the Yokohama V8 Utes took a turn for the best at Mount Panorama last weekend.

The former class champion finished second behind David Sieders, but his closest-rival Jack Elsegood suffered exclusion from the final race on Sunday morning after a wheelbase technical infringement was discovered during post race scrutineering.

The results sees Johnson skip away to a comfortable 71-point lead in the title. The lead isn’t enough to take life easy yet, and Johnson says that he was pushing to beat Sieders at Bathurst.

“It’s good to put more points on the board,” he said.

“I was hoping to catch Dave but I couldn’t get enough straight-line speed however I’m still happy with second.”

Sieders’ great Bathurst result (two race wins) puts him 111 points adrift of the lead,  was happy with the round win.

“It feels awesome to win at my home event and on your first time around Bathurst in a V8 Ute so I’m really happy with the result,” said Sieders.

The next round of the 2010 Yokohama V8 Ute Racing Series – protected by Armor All will take place at the Armor All Gold Coast 600, 22-24 October.

V8 Utes points after Round 6