Pye to test F3, return to OZ for Gold Coast

Pye to test F3, return to OZ for Gold Coast 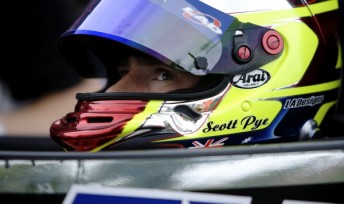 Scott Pye will be a busy boy in the coming two weeks.

The recently-crowned Formula Ford Champion of Great Britain will test a Formula 3 car with Motul Team West-Tec at Rockingham on 18 November.

The test is part of his reward for winning the British Formula Ford Championship.

Before that test, though, he will compete in the prestigious Formula Ford Festival at Brands Hatch this weekend. A few days later, he will return to Australia to attend the Armor All Gold Coast 600 as a guest of TeamVodafone.

It will be the first time that Pye has returned to Australia after he left his South Australian home to begin his international driving career.

Pye picked up sponsorship from TeamVodafone boss Roland Dane for this season, repaying his faith with victory in the British championship.

Next year, Pye is set to compete in the British Formula 3 Championship, although a deal is yet to be officially signed.

Pye told Speedcafe.com.au that he will use the opportunity to return to Australia (with his manager Perry McCarthy) to network with potential supporters for the coming seasons.

“Perry and myself are both coming out and Roland has organised for us to meet with him and other people regarding next season,” Pye said.

“Nothing has been signed for 2011. We’ll come back to Australia and see what the interest is. The teams are there for me to race with, the offers is on the table, we’ll just see where it goes.

“Roland has been a huge supporter of mine this season, and I’m hoping that relationship will continue, but it’s important for me to get back and see the guys.

“For us, the most important this is next year and British Formula 3 and hopefully meeting with potential new partners.”

Besides the support of Triple Eight, Pye was assisted by the Australian Motor Sport Foundation, and that financial support could also continue next year.