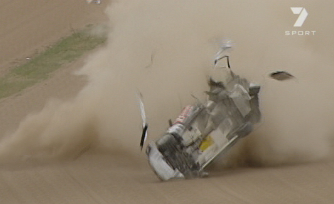 The start of the 2010 Supercheap Auto Bathurst 1000 has started with a major accident at Mount Panorama.

Fabian Coulthard’s Bundaberg Red Racing Commodore VE rolled five times when the rear left tyre of the Walkinshaw Racing-built car exploded at the turn in point of the flat out Chase.

The incident happened on the first lap of the race.

The New Zealander walked away from the incident unscathed.

A start-line replay shows that Coulthard was clipped in the left rear by the Rock Racing entry of Jason Bargwanna while Bargwanna was avoiding the slow starting Michael Caruso.

Coulthard was not able to be released from the medical centre as the medical team monitor his blood pressure. He is next scheduled to meet the press at midday.