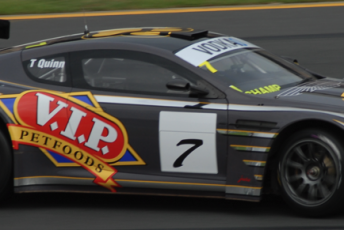 Tony Quinn has dominated Round 5 of the 2010 Vodka O Australian GT Championship – taking pole position and both race wins in his Aston Martin DBRS9.

Porsche drivers James Koundouris (Supabarn Supermarkets), Max Twigg (Trueloc) and Theo Koundouris (Supabarn Supermakerts) had solid weekends. The trio took fifth, sixth and seventh respectively in Race 1, before each moved up a place in Race 2 when Greg Crick’s Dodge Viper retired from fourth place on the formation lap with fuel pump issues. Crick had looked set for a podium in Race 1, before he was passed by Wall on the final lap of the race.

The Vodka 0 Australian GT Championship at Sandown on November 19-21, with Wall looking to wrap up his second consecutive crown at the Melbourne venue.