Qualifying postponed until Sunday at Suzuka

Qualifying postponed until Sunday at Suzuka 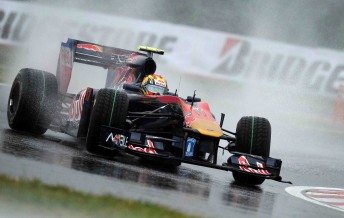 Qualifying for the Japanese Formula One Grand Prix at Suzuka has been pushed back until Sunday morning due to bad weather.

The morning’s final practice had been a near washout, with only two drivers recording times. Toro Rosso’s Jaime Alguersuari topped the session, ahead of Virgin’s Timo Glock.

The conditions worsened for qualifying, with the Safety Car sent out periodically to check the state of the track. Weather forecasts showed no sign of improving, and with the afternoon light rapidly fading, stewards declared the day at 3.18pm.

Qualifying will now be held at 10am local time.

This is a similar situation to the 2004 Japanese Grand Prix which saw qualifying washed out.