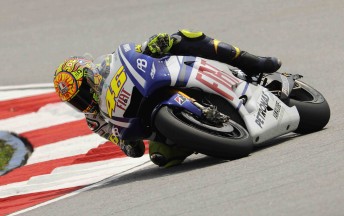 Valentino Rossi’s quest to assert his authority over team-mate Jorge Lorenzo before he leaves Yamaha at the end of the season continued during practice at Sepang.

Rossi, who has just four races remaining with Yamaha, topped the Friday times in Malaysia, just over a tenth of a second ahead of Andrea Dovizioso on the sole Repsol Honda.

Casey Stoner suffered a front end lose 12 minutes into the session, and could not improve from fourth fastest when he rejoined the circuit in the closing stages.