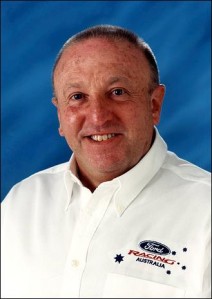 Fred Gibson is officially a legend of Australian Motorsport. In 2004 he was elected into the most exclusive motor racing club in the country, the V8 Supercar Hall of Fame.

There is not a lot that Gibson has not achieved when it comes to motorsport. He had success as a driver and saw even more success as a team manager and owner.

Gibson started racing in the mid-1960s, racing production sports cars but soon moved up to the most popular form of racing in Australia – touring cars.

In 1965 he made his debut at Bathurst but had to wait all of 12 months to ‘finally’ have some success. In 1965 he drove his Morris Cooper S to second place behind Bob Holden. Grabbing the attention of Harry Firth, he was invited to drive in the factory Ford team the following year and promptly won his first Bathurst crown.

It was a meteoric rise for a young star in the making, but Gibson took it all in his stride.

“My early success wasn’t a huge surprise thanks to Harry (Firth),” Fred Gibson explained to Speedcafe.com.au

“Harry knows everything and always prepared a good car.

“I never met him until I got to Bathurst. The deal to drive for him came through contacts within Ford Australia; it was all pretty low key.

“Harry tells you exactly what to do and how to drive the circuit. I was surprised how quick I was straight away but I just did what he told me.

“It’s amazing what you can do when someone like that tells you to just go with it.”

While further Bathurst success eluded him as a driver, the next several years saw success of a different kind. He was ‘at home’ racing at Amaroo Park, enjoying many victories, and he took back-to-back titles in the 1970 and 1971 Group E Series Production Sedan Championship, otherwise known as the Toby Lee Series, which was held at Oran Park.

“As far as Ford was concerned they wanted me to do New South Wales events, so I used to spend a lot of time at Oran Park and Amaroo,” said Gibson.

“NSW was my territory and I got a lot of my experience there.

“I always enjoyed driving there and have a lot of very happy memories of those circuits. It’s a shame they are no longer in use.”

By the early ‘80s Gibson had moved away from Ford to join Nissan. It was a very wise move, his team secured pole at Bathurst twice, in 1986 and 1987, and won at Sandown twice. During his more than 10 year involvement with Nissan he eventually moved away from the steering wheel and became its team manager and then owner.

During the Group A era Gibson mentored newcomers Glenn Seton and Mark Skaife, who would secure seven Touring Car championships between them.

“I’m one for young drivers and putting old heads on them,” said Gibson.

“Bo (Seton) had moved down to Melbourne to work with me and I gave Glenn a go, which enabled me to start with a young guy, that’s how we started with Glenn.

“Bo recommended Mark. I watched him race at Oran Park, winning a race from the rear of the grid and thought that he had a lot of talent.

“I asked him to come down and work for me, not as a driver, but as a gopher initially, thinking that he, like Glenn, had the talent to be a very good driver.”

It didn’t take long for Gibson to experience Championship success. He enjoyed his first Championship win in 1990 with Jim Richards.

“1990 was fantastic, getting Jim (Richards) was a coup to start with,” said Gibson.

“I wanted to get someone really experienced to teach the young guys, but still be able to accumulate points.

“Jim did a great job, everything came together.”

Gibson’s touch with the Nissan GT-R, one of the most dominant cars in history, saw him win three successive Touring Car Championships, and in 1991 an 1992 he won Bathurst, accomplishments that he rates over any of his driving success.

“I value the success with the Nissan team in the 1990s over my Bathurst win, without a doubt,” said Gibson.

“It was terrific to win at Bathurst, but that’s what I was there for. I was lucky enough to get the drive.

“The plan was to come down to Melbourne run the team for four years and return to Sydney.

“The success of those Nissan days was a challenge but I was very happy with how it turned out. It was an immensely enjoyable time of my life.”

With the introduction of modern day V8 Supercars, Gibson enjoyed success with Skaife for a second time when he added the 1994 Championship title, this time in a Holden, to his 1992 debut win.

“I was pissed off when the series went to Holden versus Ford,” said Gibson.

“You see at the time, with the Nissan, we had the best mouse trap as they say, we worked our bum off, it was difficult car to work on.

“You had to work hard to make it a supercar. We got it all together and won races.

“We knew the change to Ford and Holden was going to happen. We came out with a Holden because it was the best commercial deal for us, not because we wanted to race Holdens or Fords. We worked unbelievably hard to get the car up to speed.”

Gibson is a fan of the modern championship but believes the cars have too much down force.

“I think the championship is great but I’d like to reduce the down force so that the real drivers with the real talent win the races,” said Gibson.

“At some circuits there is less than a second between the first car and the last car. You don’t tell me that those drivers are all as good as say a Whincup, it’s rubbish.

“The guy coming 20th is only two-tenths slower than Whincup, why is that so?

“Reduce the down force so that the real drivers win.

“I’d also give them stickier tyres, so that they have more grip and there are better overtaking opportunities.”

In 1999 Gibson experienced another Bathurst win, this time with the Wynns Racing entry, driven by Greg Murphy/Steven Richards. His time as Holden team owner came to an end in 2000 when Wynns sponsor Garry Dumbrell (Paul Dumbrell’s father) purchased the team.

Lured back to the blue side, Gibson purchased his own team and with the assistance of Ford Australia started up 00 Motorsport with Holden young gun Craig Lowndes as its number one driver.

“I was asked, if I could have Craig Lowndes through a deal with Ford would I be interested in running a team, and I thought shit, that’s a good deal, yeah I’d be interested,” said Gibson.

“I had a meeting with Geoff Polites and worked out how it could all happen. It was exciting at the time.

“I was so chuffed when we came out and we put 00 on the podium at the first race at the Grand Prix.

“It was good but bad, because results like this were expected of us all the time.

“I’m so pissed off that it all fell apart it all could have been quite successful.

“The team fell because of the egos; that’s all I’ll say.”

Gibson hasn’t been to a race track for 10 years and has no intention of racing or entering a car ever again. He spends his time spread across Melbourne and Canada, where his kids live. He and his wife travel to spend time with their grandkids. Other than this, Gibson is retired.

Since the demise of 00 Motorsport Gibson has been involved in a court case which he hopes will be resolved shortly. Judgement is to be passed in November.

“Triple Eight, the best team in the country will go one-two, with Skaife and Lowndes crossing the line first,” said Gibson.

“I reckon Tander will come back and Winterbottom will be up there.”

Here is some classic Fred Gibson at the wheel  – what would the chances of a TV commercial like this being shot today!