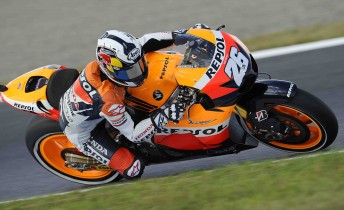 Dani Pedrosa is aiming to return to the MotoGP World Championship at Phillip Island in mid-October, after breaking his collarbone last weekend in practice for the Japanese Grand Prix.

The Spaniard was hopeful of an early return in Sepang, but has now officially been ruled out of this weekend’s action.

The Repsol Honda Team issued an official statement on the situation today.

“After the successful operation, there was a very slim chance that the Spaniard would be fit enough to make the journey from Barcelona to Malaysia and attempt to take part in this weekend’s MotoGP race,” said the statement.

“However, after careful consideration, Pedrosa has made the understandable decision to stay at home to continue his recovery.

“The target for his return remains the Australian Grand Prix, practice for which begins on October 15.”

Pedrosa’s countryman Jorge Lorenzo now only needs to finish in the top 10 in one of the remaining four races to win the 2010 World Championship.

Honda will not replace Pedrosa for this weekend’s race.