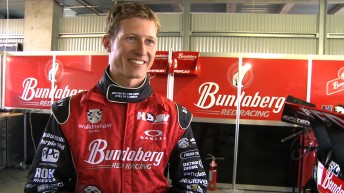 Australian IndyCar star Ryan Briscoe arrived at Bathurst this afternoon, and says he’s excited to be back in a V8 Supercar.

Briscoe first entered the V8 Supercar endurance races for the Holden Racing Team in 2006, and will join Andrew Thompson in the #10 Bundaberg Red Racing VE this weekend.

The former Sydneysider has had little other racing experience in Australia, after leaving home at a young age to embark on a career that saw become Toyota’s Formula One test driver in 2004.

“I haven’t had many chances to race in my own country, especially for the biggest race of the year at Bathurst.

“I grew up watching this race, and always dreamed of racing here.

“I feel a little nervous coming over cold turkey with no real preparation, but I’m hoping that after the practice sessions I can go into the race feeling comfortable. I really want to be able to hold my own for the team, and for Thommo, and go on to get a good result.”

In 2006, Briscoe shocked the V8 Supercar establishment by setting provisional pole for the Sandown 500, but sadly did not get to drive in the race at Bathurst after co-driver Jim Richards crashed early in the race.

This weekend, Briscoe says that his aim is to finish.

“I really don’t know what to expect at the moment from the car.

“In 2006, since I didn’t qualify at Bathurst or do any laps in the race, I didn’t really get up to speed. So I’ve got to still learn the track.

“Thommo’s run really well here the last few years, and I’m sure he’s looking to get his best ever result, so hopefully I can help him do that.”

After this weekend’s race, Briscoe will suit up in Toll HRT colours, pairing up with Will Davison in the #22 Commodore for the international-flavoured Armor All Gold Coast 600.

Check out this video on Briscoe at Bathurst