James Moffat says that competing at this weekend’s Supercheap Auto Bathurst 1000 is the realisation of a life-long ambition.

To add to the significance of the event for Moffat Jr, this year’s mountain marathon marks the 40th anniversary of Allan’s first win in 1970.

The 27-year-old Victorian made his V8 Championship Series debut in the last event at Phillip Island, and while it wasn’t a meeting that he’ll fondly remember after a number of incidents, he is heading to Bathurst optimistic. 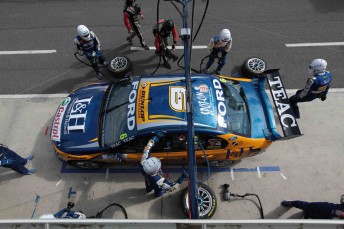 The Richards/Moffat entry executes a pit stop at Phillip Island

Moffat is not a stranger to Mount Panorama, having driven there in both Carrera Cup and Fujitsu V8 Supercars in the past, but he says that this year’s pilgrimage will mean more.

“I suppose you could say this weekend is the realisation of a dream,” Moffat Jr said.

“For as long as I can remember I’ve always wanted to drive in the main race … so to finally get here feels pretty good.”

Moffat will get bulk V8 miles this weekend, as he’ll compete in the Fujitsu V8 Series in his Norton 360 Falcon.

“I’ve got a pretty full schedule with my Fujitsu V8 Series drive on as well but the more track time the better,” he said.

“It’s such an awesome place so to get a double dose of it is a bonus.”

The V8 Supercars hit the track for their first practice session this Thursday morning.