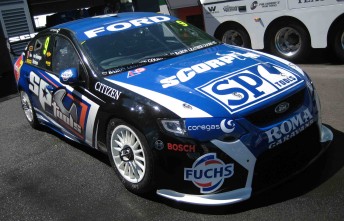 Shane van Gisbergen and John McIntyre will compete with a fresh look to their SP Tools Falcon in this weekend’s Supercheap Auto Bathurst 1000.

The #9 Stone Brothers Racing-prepared entry will feature SP Tools’ modernised logo on the doors of the Ford Falcon FG, while the standard, traditional SP Tools logo will remain on the bonnet of the car.

The new SP Tools was implemented by the Austech Industries-owned company recently, using it in its marketing push through Australian motocross racing.

The new side colours is a Bathurst special and will not be seen after this round. 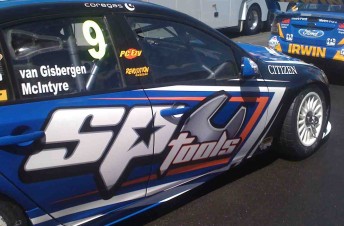 Van Gisbergen is currently fifth in the V8 Supercars Championship Series after a breakout season. While he is yet to take a win, he has stood on the podium in six of the 17 races so far this year.

Together with fellow Kiwi McIntyre, the pair is rated as one of the big hopes in this week’s edition of The Great Race.

The only other ‘all-Kiwi’ pairing is Bundaberg Red Racing’s Fabian Coulthard and Craig Baird.

McIntyre says that he is looking forward to this weekend’s race.

“This is the first time that I’ve been driving in a car classed as one of the potential winners, so that’s a real highlight for me,” he said.

“It’s also the first time I’ve been contracted to drive at Bathurst two years in a row, so that gives me a lot of confidence that, together, Shane and I can do a great job in the #9 SP Tools Falcon.”

Van Gisbergen and McIntyre finished 27th at the L&H 500 at Phillip Island, three laps off the lead after engine problems crippled their campaign.