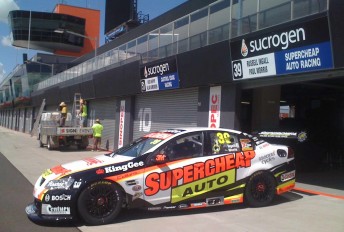 The V8 Supercars circus has hit Mount Panorama in preparation for this weekend’s Supercheap Auto Bathurst 1000 – the 10th event in this year’s V8 Supercars Championship Series.

All of the team’s transporters arrived this morning, with the first of the cars to be unloaded including the Toll Holden Racing Team, Paul Morris Motorsport and Stone Brothers Racing.

While the team’s race machines only arrived this morning, many punters have already flocked to The Mountain. Camping zones at both the bottom and top of the mountain are filling up considerably, with still five sleeps until the big race.

The majority of the drivers are arriving throughout the afternoon, with all eight Kelly Racing drivers the first to reach the circuit this morning – ending their two-day drive to Bathurst with a midday press call in pit lane.

V8 Supercars staff members are on the ground at Mount Panorama – some of which have been at the circuit for two weeks in preparation for V8 Supercars’ biggest race of the year.

The weather forecast (listed below, courtesy of www.weatherzone.com.au) looks promising for a dry race.

Stick with Speedcafe.com.au over the coming week for all the latest V8 Supercars news and track results, plus all of the support categories, plus coverage of the Formula One race in Japan and MotoGP in Sepang this weekend.